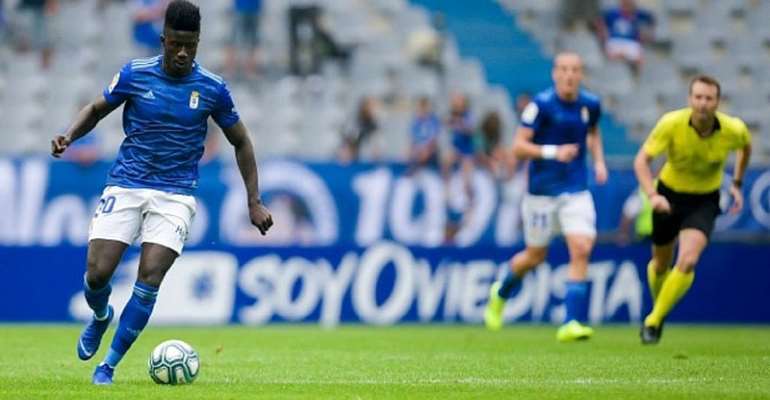 Ghana and Real Oviedo striker, Samuel Obeng has revealed that several clubs have shown interest in securing his services in the upcoming summer transfer window.

After joining Real Oviedo from Spanish Segunda Division B outfit Calahorra in the summer of 2019, the young striker has managed to gradually cement a place in the senior team of the club.

Following a season that saw Samuel Obeng netting 3 goals in 16 appearances, it appears he has already attracted interest.

In an interview with Accra FM, the 23-year-old forward has disclosed that even though he wants to stay at Real Oviedo next season, there are clubs chasing after his signature.

“Yeah I want to stay with Oviedo but there are some clubs that have shown interest. At the moment I have not yet taken any decision.

“It is my manager who will deal with the offers but I know they are coming. The club [Real Oviedo] also wants to renew my contract”, Samuel Obeng shared.

The attacker has developed his game in the past year with some national team football also coming in handy. During the 2019 CAF U-23 Championship in Egypt, Obeng was part of the Ghana squad and managed to score 2 goals after featuring in 5 games for the Black Meteors.