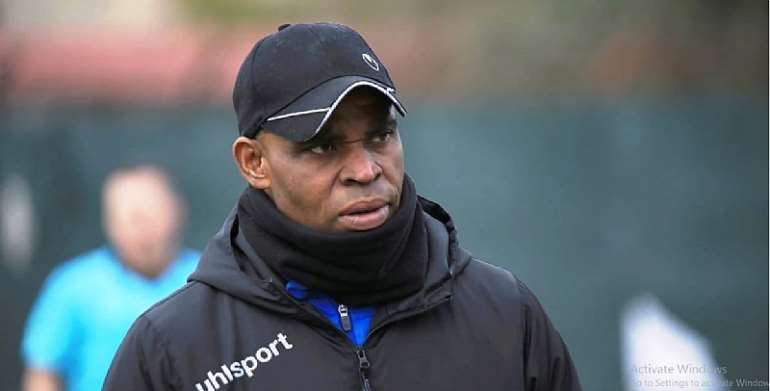 At a period when talks about the low presence of black managers across major European leagues is dominating headlines, Nigeria-born Ndubuisi Egbo's breakthrough as the first African to win a league title in Europe after leading KF Tirana to the 2019/2020 Albanian Superliga Championship, is indeed a breath of fresh air. They finished on 69 points, six more than rivals Kukesi.

“My motto is very simple: impossible is nothing,” Egbo, a former Super Eagles goalkeeper told CAFOnline.com

“I also believe that the best is not good enough; I am a fighter, a survivalist and I believe with hard work better can be the best.”

Tirana’s 25th league title which coincided with the club’s centenary celebration has already secured the Egbo-tutored side a spot in the qualifiers for next season’s UEFA Champions League and they can also add the Albanian Cup to their trophy cabinet on August 2 when they tackle Teuta Durres in the final.

“Without any doubt, this is one of the best moments in the history of KF Tirana; it is an awesome feeling and you can imagine the celebration at the end of the season when the club will be celebrating its 100th anniversary (the club was founded on 15 August 1920 as Shoqata Sportive Agimi),“ explained Egbo who turned 46 on July 25.

“The last time we won the league title was 11 years ago, and we are already in the domestic cup final. I keep telling my players that we have to leave our mark in the history of this great club.

“I have said this severally, and I want to repeat that we want to do well when we play in next season’s UEFA Champions League to show that all that we have achieved so far in Albania with KF Tirana is not a fluke.”

A holder of the UEFA B Licence, Egbo’s transition from goalkeeping to management has been as smooth as the pillar flashing in the sun after a distinguished career at both KF Tirana and KF Bylis with whom he won the first division championship in the 2007/2008 and 2010/2011 season.

He started his coaching career as the goalkeeper trainer of KF Bylis before being promoted to substantive coach. He led the club to the final of the 2012 Albanian Cup where they lost to KF Laci.

It was on the basis of his achievements with KF Bylis that he was recruited by KF Tirana in 2014 but first as goalkeeper trainer and in between served as interim coach following the successive departures of Albanians Ardian Mena and Julian Ahmataj. He was only entrusted with full responsibility as head coach last year.

Yet Egbo will be the first to admit that his success so far was predestined: “If I thought it was going to be impossible, I wouldn't have accepted the job in the first instance; and winning this league title with Tirana is a fulfilment of a prophecy.

“I sought the grace of God before accepting to come over to KF Tirana. Our success is not only about faith but we’ve worked hard too.”

He joined Tirana’s coaching rank as the goalkeeper trainer in 2014 and served in that capacity until last year when he was named as the interim coach when the club was tethering towards relegation in the 10-team Kategoria Superiore .

Indeed Egbo’s romance with the capital-based club can be likened to the proverbial marriage made in heaven because this was his first port of call as a player straight out of the continent after playing for Egyptian side, El Masry.

“It is always the dream of every African player to play in the major leagues of Europe; in England, Germany, Spain or Italy but it was fate that took me to Albania,” explained Egbo who starred for a string of Nigerian clubs including NEPA Lagos and Julius Berger.

“Of course, I would have loved to play in the major leagues in Europe but at that time, we had very few African goalkeepers in Europe.

“When I left Nigeria, I was in Egypt for three years with El Masry and the Chairman of El Masry at the time happened to be the owner of KF Tirana. It was at his instance that I came to Albania. Apart from the opportunity of coming to Europe, the financial aspect was okay. On the whole, I can say coming to Albania was one of the best decisions I’ve made in life.”

Egbo said having a sound coaching education as well as working with several coaches during his playing days prepared him for his managerial life.

“All along, I knew I’ll end up in football management when my football is over,” stated Egbo who was in the Super Eagles squad for the 2000 Africa Cup of Nations where they lost to Cameroon on penalties in the final. He was also in the bronze medal-winning side two years later in Mali.

“First and foremost, my passion for coaching right from my playing days as well as the inspiration from all the coaches I’d worked with-especially Christian Chukwu and Joe Erico during my days at NEPA FC of Lagos.

“I learned so much from both Erico and Chukwu because they taught us not only about football but also how to survive anywhere in the world.

Life is about survival of the fittest and Egbo reckons that his success with FK Tirana will serve as an inspiration for other African coaches and also a wake-up call to major leagues of Europe for consideration.

“My success with KF Tirana is not a personal achievement but for Nigerian and African coaches because it has shown that coaches of African origin are as good as their counterparts from any part of the world if given the same opportunities.

“What coaches of African origin need is the opportunity to show what they can do, and I hope my success with KF Tirana will open the eyes of everybody to this reality.”

A big fan of Portuguese Jose Mourinho, Egbo observed that coaching at all levels is about the same philosophy all over the world:

“A good coach must be knowledgeable, disciplined, forthright and with good interpersonal relationship because you are going to deal with over 20 players at every point in time.

“The person must also have the wisdom to treat everybody equally irrespective of culture, colour or individual characteristics; and these are some of the things I have been able to put in place in conjunction with my coaching staff here at KF Tirana.

“Since I took charge, we have been able to create harmony within the structure and given the players winning mentality because I’m a winner and I only want the best for myself and my team,” echoed Egbo.

West Gonja: We didn't know the bags of rice were for our chi...
17 minutes ago