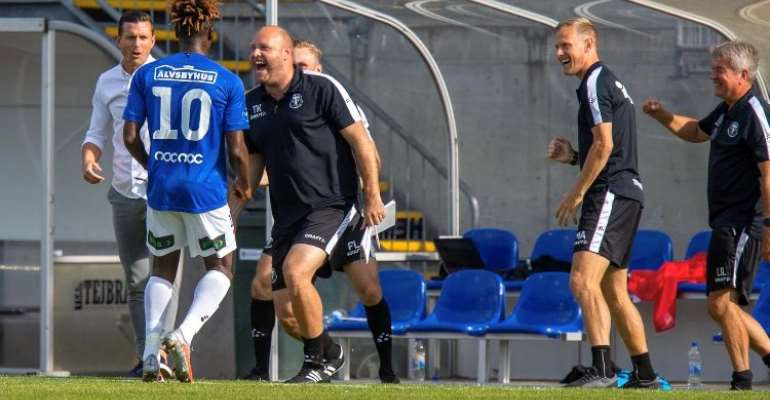 Ghanaian international Abdul Fatawu Safiu has scored a hat-trick today to steer his Trelleborgs FF side to a massive 4-1 win against Dalkurd FF in the Swedish lower division.

In a crucial Matchday 8 fixture of the 2020 Swedish Superettan season, the former Kumasi Asante Kotoko forward earned a starting spot to help his team seek for the win in the home clash at the Vangavallen.

Abdul Fatawu Safiu netted his first goal on the 11th minute to double the lead for Trelleborgs FF after Erik Andersson had opened the scoring for the side.

Following a fightback from Dalkurd FF, they managed to score through Kerfala Cissoko to half the deficit on the 21st minute.

Just before the halftime break, Abdul Fatawu Safiu found the back of the net two times in quick succession on the 41st and 43rd minutes respectively to complete his hat-trick.

Despite a pulsating encounter in the second half, neither side could get on the scoresheet with Trelleborgs FF cruising to a deserved win to ensure they bagged all the 3 points.

Ghana’s Abdul Fatawu Safiu lasted 83 minutes of the game and emerged as the Man of the Match.

This is the 26-year-old’s 8th appearance of the Swedish Superettan season and he is expected to be instrumental for Trelleborgs FF throughout the campaign.

Akufo-Addo government most lawless Ghana has ever had – Nyah...
46 minutes ago