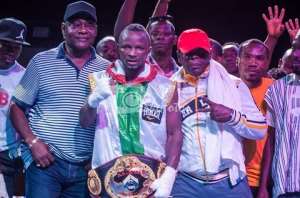 Former boxing world champion in the Bantamweight division, Joseph Agbeko, says he wants to win a world title again before he hangs up his gloves.

At 43, Agbeko is back training at the Seconds Out Gym behind the Kwame Nkrumah Museum and he has set his sights on a world title.

He retained the title twice before he lost it to Yonnhy Perez in 2009 and won back in a revenge fight in 2010, making him a two-time world champion.

In 2013, he lost to Guillermo Rigondeaux and has had a very silent career since.

Now, in a bid to retire, he wants to get his hands on another world title and is training heavily for it.

“I am rated Number 3 in the world so you should know that I want to win a world title,” he said.

“I wouldn’t put myself there for nothing. I am training. I believe within me that I have what it takes to win the championship again.

“Once they put it out there, WBC, WBA, WBO whichever title, whoever they put in front of me, I know I will beat that person.”