'We Are Not Arrogant': Jurgen Klopp Hits Back After Frank Lampard Jibe 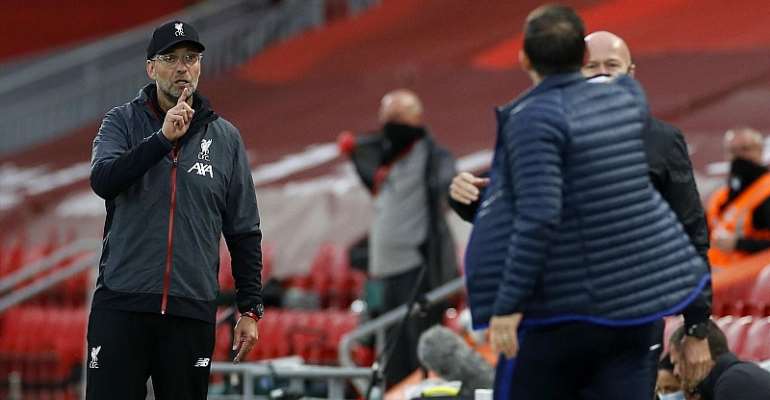 At his news conference ahead of Sunday's trip to Newcastle United for their final game of the season, Klopp said Lampard had a lot to learn about conducting himself as a manager.

"We are not arrogant. Frank was in a competitive mood, I respect that. Say what you want in that situation, it is pure emotion, he came to win and get Champions League qualification and I respect that a lot," Klopp told reporters on Friday.

"Final whistle, as a real sportsperson, you have to close the book in this moment. He didn't do that and that is what I don't like, honestly. The only reason I am speaking about it is because he spoke about it afterwards."

Lampard had said earlier on Friday that he regretted the language he used but still seemed aggrieved by the behaviour of those on Liverpool's bench - although he was quick to specify that he had no problem with Klopp himself.

Footage showed a visibly agitated Lampard gesturing and yelling at Klopp and the Liverpool dugout when the home side won a free-kick during Wednesday's 5-3 victory.

"In terms of the language I used, I do regret that. These things get replayed a lot... I've got two young daughters on social media," Lampard told reporters ahead of Chelsea's weekend match against Wolverhampton Wanderers.

"In terms of regretting having the passion to defend my team, no. I could have maybe handled it slightly differently. Some of the reports were I was upset with the celebrations - far from it.

"They can celebrate every goal... I'd have had a beer with Jurgen Klopp after the game but there were things on the bench -- not from Klopp -- that I felt crossed a line. I regret the language but we'll move on."