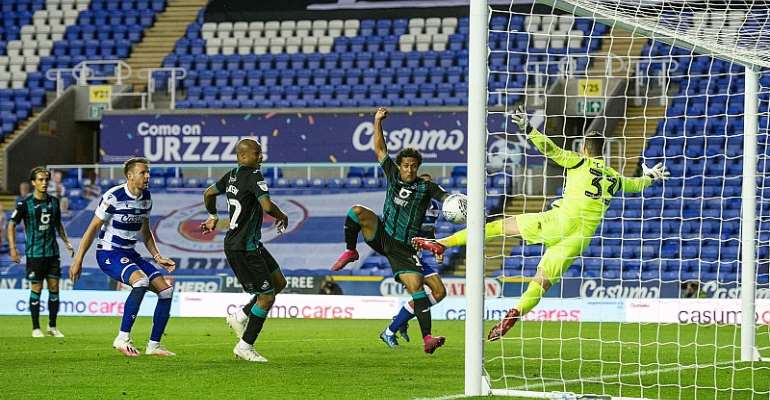 Ghana international, Andre Dede Ayew has secured a playoff spot with his Swansea City outfit to keep their hopes of gaining promotion to the English Premier League alive.

After a very long season, 3 teams in the English Championship had to fight to the wire on the final day of the lower division to cement a place in the playoff.

In a crucial Matchday 46 fixture today, 7th placed Swansea City locked horns with Reading at the Madejski Stadium in a must-win encounter.

Not willing to leave their fate in the hands of the 2 other teams chasing a playoff spot, the Swans started off very well and took the lead after 17 minutes of play through teenager Rhian Brewster.

Though George Puscas will level the score for Reading before the first half break, a brace from Wayne Routledge plus an equalizer from Liam Cullen ensured that Swansea City cruised to a massive 4-1 win.

Having contributed with an assist on the evening, Andre Ayew and his team get to celebrate through the night knowing that they have secured a playoff spot to fight for promotion to the English Premier League.

The qualification has become possible due to Nottingham Forest’s 4-1 defeat at home to Stoke City.

Andre Ayew, 33, has been instrumental to Swansea City’s success this season after scoring 15 goals and proving 7 assists in 44 appearances.