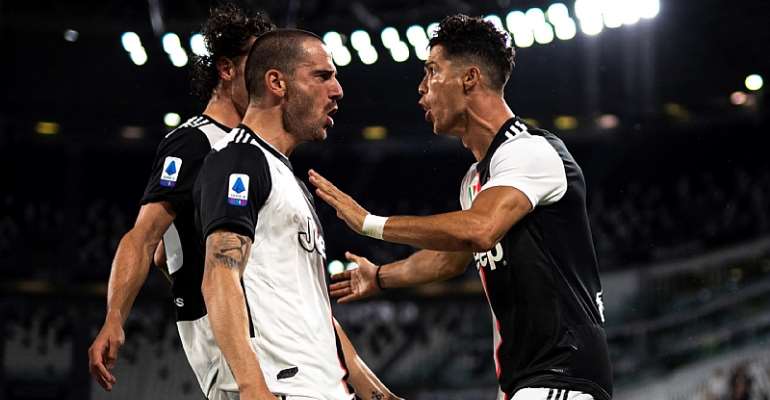 Juventus strengthened their grip on the Serie A title with a 2-1 win over fellow Scudetto hopefuls Lazio at the Allianz Stadium.

After a goalless first half, Cristiano Ronaldo scored two quick goals to secure the win in Turin, which leaves the Bianconeri just one victory from retaining their crown.

Either side could have taken the lead in the first half, with both Alex Sandro and Ciro Immobile striking the woodwork and Adrien Rabiot forcing a good save from Thomas Strakosha.

Juventus were given the chance to take the lead from the spot within minutes of the restart, with VAR adjudging Bastos to have handled in the box. Ronaldo made no mistake from the spot.

Minutes later, it was 2-0. Paulo Dybala robbing Luiz Felipe in midfield, sprinting through an empty Lazio half and feeding Ronaldo for a tap-in.

The woodwork denied the Portuguese a hat-trick soon after and Juve were made to endure a nervy ending after Immobile tucked home a penalty following a clumsy foul from Leonardo Bonucci.

Wojciech Szczesny was forced into a fine save late on as the visitors attempted to mount a remarkable comeback but Juve held on for a big win.

Both Ronaldo and Immobile have now hit 30 goals in Serie A this season, becoming only the third and fourth players to do so in the last 60 years.

Maurizio Sarri's men could potentially seal their title with a trip to Udinese on Thursday, depending on results elsewhere.

Akufo-Addo government most lawless Ghana has ever had – Nyah...
38 minutes ago