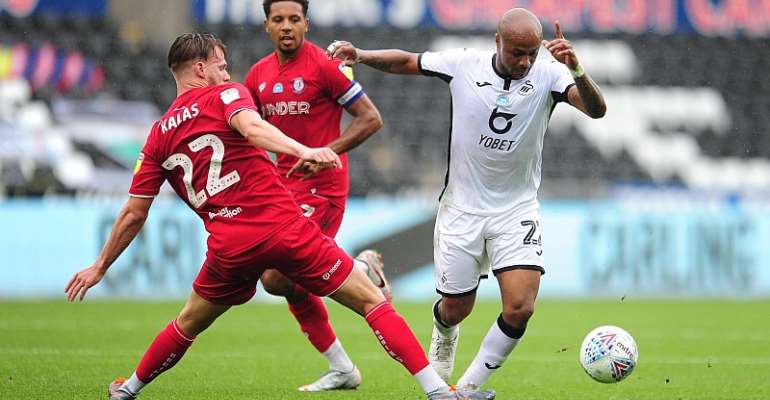 Ghana international Andre Dede Ayew earned high ratings [8.0] on Saturday afternoon to help his Swansea City side post a crucial 1-0 win over Bristol City to keep their hopes of promotion to the English Premier alive.

With the 2019/2020 English Championship season set to end next week, the two clubs locked horns today to battle for maximum points to ensure a strong finish to their respective campaigns.

Needing the points more, Swansea City put up a top performance at the Liberty Stadium to send Bristol City back home empty-handed.

A compact performance from the home team with strong inputs from Andre Ayew in the attacking third produced the only goal of the game on the brink of halftime when Connor Roberts found the back of the net.

Though Bristol City will earn a penalty kick in the second half, Famara Diedhiou who stepped up to take the kick failed to convert.

The win means that Swansea City still has a chance to finish in a playoff spot despite being behind the team in the 6th position, Cardiff City by 3 points.

The Swans will now hope to win their final match of the season against Reading and hope Cardiff loses to Hull City.

Andre Ayew who has 15 goals and 6 assist this season will be key in that upcoming game scheduled to be played on Wednesday, July 22, 2020, at the Madejski Stadium.