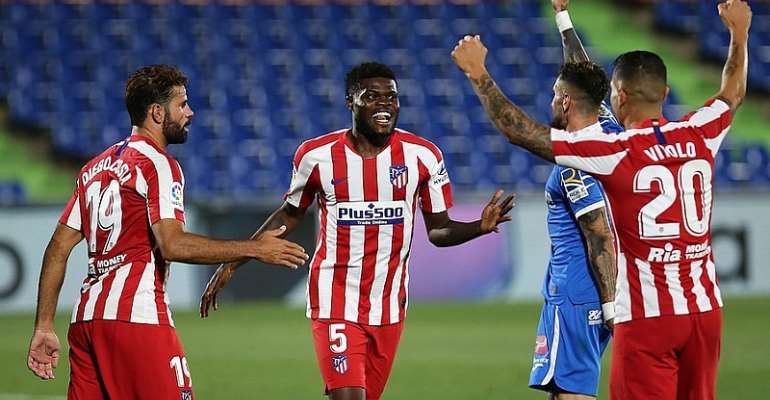 The hardworking and ball-playing midfielder has been impressive for the Rojiblancos throughout the 2019/2020 football season.

In the trip to the Coliseum Alfonso Perez yesterday, his manager named him as one of the substitutes, missing out on a spot in the starting eleven.

Despite a pulsating encounter in the first half that saw Getafe creating a number of chances, the two teams went into the break with no goal.

Less than 10 minutes into the second half, Atletico Madrid finally found a way through as they broke the deadlock courtesy a strike from Marcos Llorente with an assist from Yannick Carrasco.

On the 67th minute, Spanish midfielder Saul Niguez was subbed off for Black Stars poster boy Thomas Partey to take his place.

To complement another bossy performance, the Ghana midfielder scored on the 80th minute to put the game to bed for his Atletico Madrid side. The 2-0 win for the capital-based club his a huge boost and will surely earn the side a Champions League qualification spot at the end of the season.

Watch Partey’s 3rd goal of the season in the video below: