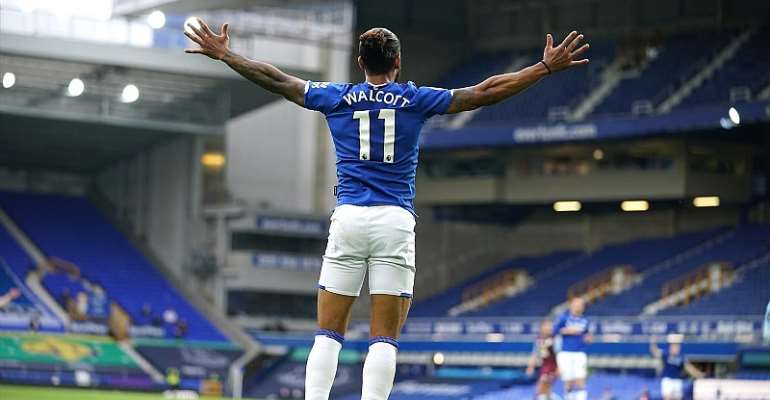 Theo Walcott of Everton celebrates after scoring his sides first goal during the Premier League match between Everton FC and Aston Villa at Goodison Park on July 16, 2020 in Liverpool, England. Football Stadiums around Europe remain empty due to the Coron Image credit: Getty Images

Aston Villa's hopes of survival were dealt a devastating blow as they conceded a late equaliser to Everton at Goodison Park.

Defender Ezri Konsa thought he had won it for Dean Smith's side in the 72nd-minute, but substitute Theo Walcott ensured The Toffees' shared the spoils with a headed goal from a tight angle with just three minutes of normal time remaining.

Villa had shown little ambition to win the game despite their precarious position, but opened the scoring from a fantastic Conor Hourihane free-kick, with Konsa stretching to score just his third goal in club football with the first shot on target of the evening.

Anwar El-Ghazi should have put the game to bed just minutes later from a Jack Grealish cross but he somehow contrived to hook an effort wide from just a matter of yards.

It was a huge miss that will haunt Villa, as Carlo Ancelotti's side rescued a point in the 87th-minute through Walcott, with the goalscorer Konsa unable to prevent his header going in despite being positioned on the line.

The draw leaves Villa three points behind 17th-placed Watford, who play their game in hand against fellow relegation-threatened West Ham in a mouth-watering six-pointer on Friday evening. Everton remain 11th with little to play for but pride after a run of poor form.