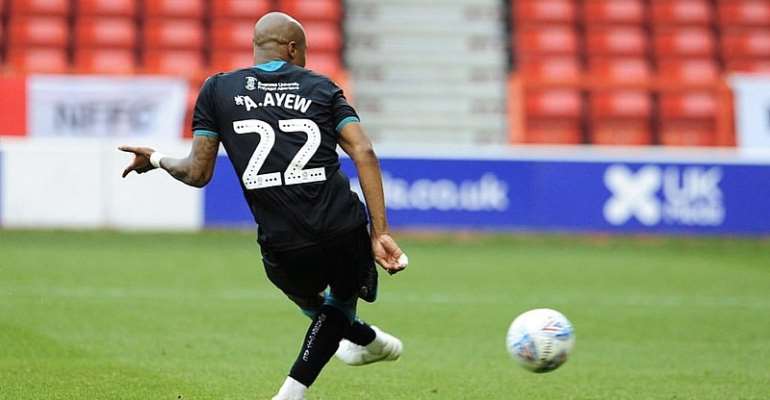 Swansea City forward, Andre Dede Ayew has expressed his frustration to the team’s 2-2 draw against Nottingham Forest on Wednesday in the English Championship.

With a spot for a place in the play-off at the end of the season glaring in the face of the Swans, they went into yesterday’s encounter at the City Ground looking for a win to enhance their chances of qualification.

Unfortunately for Swansea City, the home team equally had the quality and determination to fight for a win. Eventually, a pulsating encounter between the two teams ended 2-2 with Andre Dede Ayew finding the back from the penalty spot on the brink of halftime.

Sharing his thoughts on the game in a post on his Twitter page, the forward says it is frustrating not to have beaten Nottingham Forest.

“Frustrating to not get 3 points today. But we keep going it’s not over until the last game. Good to get on the scoresheet. Big game Saturday let’s get ready”, Ayew tweeted.

With 2 games remaining for the English Championship season to end, Andre Ayew and his Swansea City side will need to pick up the maximum points in hopes the teams above drop points to ensure they climb to a play-off position to keep hopes of gaining promotion to the Premier League alive.

Don’t incite the youth to protest – Nana B warn failed MMDCE...
54 minutes ago