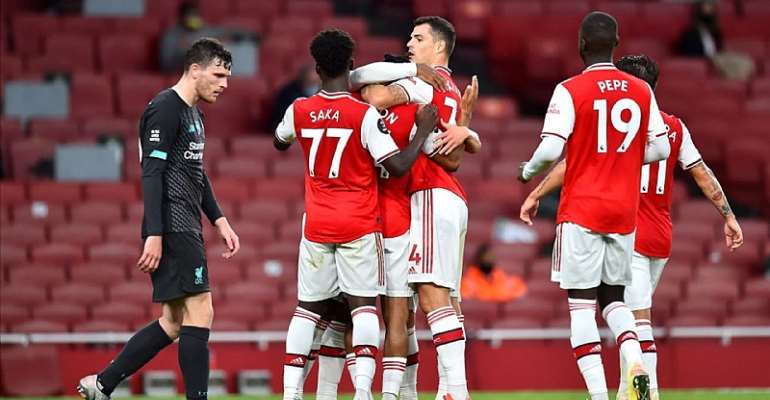 Reiss Nelson of Arsenal celebrates with teammates after scoring his sides second goal during the Premier League match between Arsenal FC and Liverpool FC at Emirates Stadium on July 15, 2020 in London, England. Image credit: Getty Images

Liverpool’s hopes of setting a new Premier League points record are over following a surprise 2-1 defeat at Arsenal.

The champions made a strong start and broke the deadlock on 20 minutes when Sadio Mane slid home his 21st goal of the season on 20 minutes.

Mikel Arteta's side were struggling to make an impact on the proceedings but were gifted an equaliser just past the half-hour. A rare mistake by Virgil van Dijk allowed Alexandre Lacazette to round Alisson and fire into an empty net.

It was a real howler, but it wasn't the end of the complacency as the Gunners stole in front just before the interval when an error from Alisson saw Lacazette cross for Reiss Nelson to snare his first Premier League goal with a fine strike into the far corner.

Liverpool responded in the second period with some intense pressure, but could not find the goal to avoid a third league loss of the campaign.

The result means the Merseysiders are now on 93 points with just two games left to play and can no longer beat Man City’s 100-point haul from 2017-18.

Arsenal stay ninth, but are just three points off sixth, and will now look ahead to a massive FA Cup semi-final at Wembley against Manchester City on Saturday. Meanwhile, Liverpool will finally get their hands on the Premier League trophy when they face Chelsea at Anfield next Wednesday.