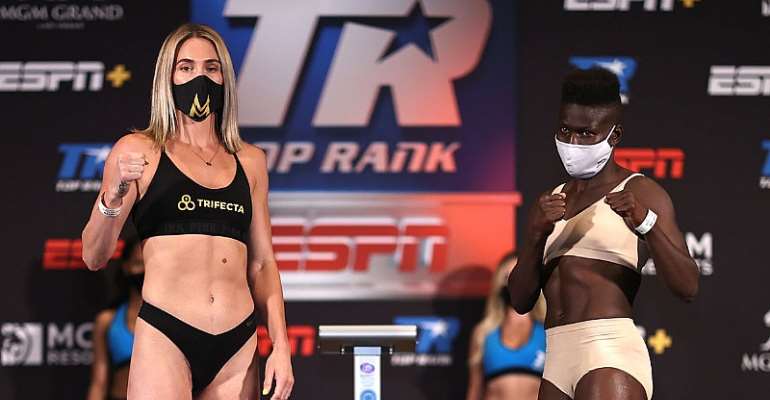 Competing since 2004, Helen Joseph is ready to show the world what she can do.

The Nigerian-born star will face off against Mikaela Mayer inside the MGM Grand Conference Center in Las Vegas, Nevada on July 14. Fighting on ESPN, the two will now main event the show after Jamel Herring tested positive for COVID-19 for the second time. For Joseph (17-4-2), who will be fighting in her sixth contest in the United States, it is a moment she will make sure nobody will ever forget.

Joseph was on a ten-fight win streak to start her career. She won the IBF Inter-Continental Featherweight Title in 2013 and the WBO Intercontinental Bantamweight Title in 2017. “Iron Lady” fought Tyrieshia Douglas to a draw, and rebounded with two wins in a row. She believes her experience trumps Mayer’s, a former Olympic fighter.

“She is (not on my level) at all as a professional boxer,” Joseph told The Ring. “And it must be great to have a promoter (Top Rank) that gives you (easy fights). If I had the opportunities that she has, I would be undefeated with all knockouts.

Mayer (12-0) became one of the first active competitors to test positive for the virus. She had to back out of her fight on June 9 against Joseph as a result of testing positive. The 29-year-old last fought in October, beating Alejandra Soledad Zamora via corner retirement. She beat Vanessa Bradford for the NABF Super-Featherweight Title in 2018 and has defended it three times.

The last fight for Jospeh was against former world champion Delfine Persoon in November, losing via majority decision. Persoon’s win was a rebound following her epic affair against Katie Taylor inside Madison Square Garden last June. When it comes to who they both face and how they get the fights, Joseph believes there is a huge difference between the two.

“I travel to different countries to fight, but nobody comes to my own country to fight me,” Joseph went on to say. “I always have to come to them. They give her easy fights, and that’s why she is undefeated. That is bulls**t for me. I don’t believe in those type of f***n’ records. I don’t see her finishing this fight with me at all!”

A win could help secure Joseph’s spot at the top of the lightweight division. If anything, a title fight could end up in her future.

The main card action begins at 9 p.m. ET. FIGHT SPORTS will be providing coverage of the fight card and the new main event.