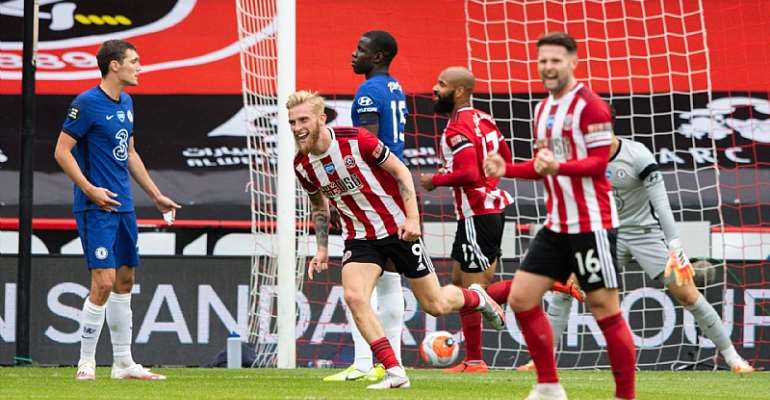 A David McGoldrick brace helped Sheffield United take a significant step towards European football and dealt Chelsea’s top-four hopes a blow as they beat the Blues 3-0 at Bramall Lane.

Oli McBurnie completed the scoring on a miserable afternoon for Frank Lampard’s men, who saw plenty of the ball but were unable to break down the organised Blades and comprehensively outplayed.

McGoldrick’s first Premier League goal opened the scoring - he reacted quickest after Kepa Arrizabalaga had done well to save a deflected McBurnie volley to end his goal drought from close range in his 26th top-flight appearance.

McBurnie then added a second before the interval, heading in at the near post following nice team move but one which cut Chelsea open too easily.

Lampard made two changes at the break and switched to a back three but to no avail, with the introduction of Olivier Giroud later the only Chelsea change which looked like it could result in a goal, but it didn't.

McGoldrick goals then turned out to be like apocryphal London busses as he added a third on the break late on to secure another marquee win for Chris Wilder’s United and leave Chelsea in danger of dropping out of the top four by Monday evening. They stay third, while the Blades are up to sixth.