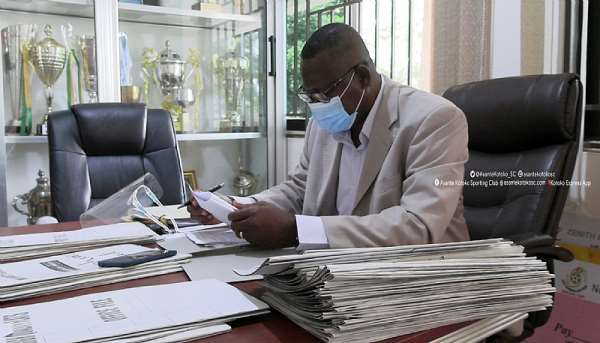 Mr. Joseph Yaw Adu, a member of the constituted board of directors for Kumasi Asante Kotoko says he is confident they will be able to bring transformation to the club.

His Royal Majesty Otumfuo Osei Tutu II has formed a 12-member board to serve as the highest decision-making body of the club and ensure the club is run as a corporate entity.

A couple of weeks into their tenure, the board has set up an Interim Management Committee with Mr. Joseph Yaw Adu serving as the acting Chief Executive Officer (CEO) of the club.

Opening up after starting the CEO job, the board member has revealed that there is a lot to be done.

He is however confident that with the expertise from the various board members, they will be able to tackle the job that has been given to them by the owner and life patron of the Porcupine Warriors club.

“It is very very doable. Am saying doable because the people am serving with on the board are very endowed. Imagine someone being the board chair of the Ghana Commercial Bank [the richest bank in Ghana], the board chairman of the Exim Bank who are into projects, and even the last 3 people that were added to us they are all capable men”, Mr. Joseph Yaw Adu told the Kotoko Express.

He added, “The woman among us has also been giving very good inputs and we are praying to be able to do the work in order to enjoy some of the success ourselves as well as the Otumfuo and the whole of Asanteman”.