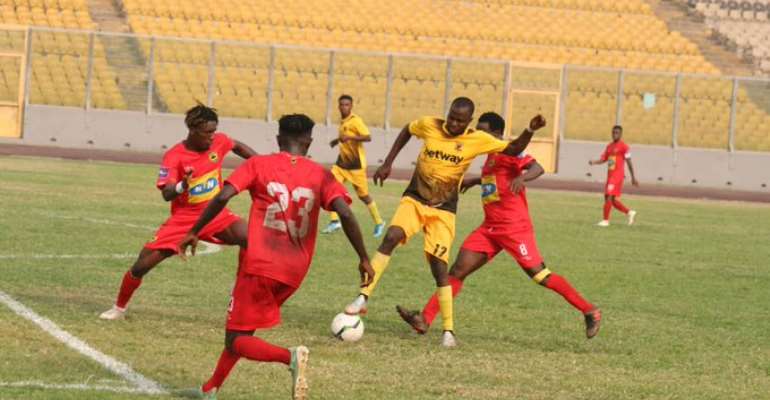 AshantiGold SC and Asante Kotoko have accepted to represent Ghana in next season CAF interclub competitions.

Both clubs were named to represent the West African country in Africa next season following the annulment of the 2019/20 Ghana football by the Executive Committee of the Ghana Football Association (GFA).

After three months of no football, the hierarchy of the country's football governing body announced the decision to cancel the season because of coronavirus.

Football came to a halt in mid-March.
Kotoko will play in the Caf Champions League while AshGold take a seat on the Confederation Cup train. The two teams were Ghana's representatives in the competitions this season.

"The Executive Council of the Ghana Football Association (GFA), has taken a decision to cancel the 2019/20 football season following a marathon meeting on Tuesday, June 30, 2020 at the GFA Secretariat in Accra," the GFA announced on its official website.

"Accordingly, all records associated to the season has been expunged but fines accrued must be honoured by clubs.

"There shall also be no demotion and promotion.
"The Executive Council also decided that per the relevant provisions of the Caf inter-club football Regulations, Asante Kotoko SC and AshGold SC will represent Ghana in the Caf Champions League and the Confederations Cup respectively.

"The Executive Council will meet on Thursday, July 9, 2020, to discuss all issues relating to the next football season and Congress.

"The GFA will continue its engagement with all sponsors and all stakeholders following the cancellation of the season."

Winners of the Ghana Tier One Special Competition which replaced the Premier League last season, Kotoko participated in the Champions League this season but the adventure ended early as they were knocked out by Etoile du Sahel of Tunisia in the first round.

Ashanti Gold, who won the Ghana Tier Two Special Competition - which replaced the FA Cup last year - played in this term's Confederation Cup where their journey was ended by Moroccan fold RS Berkane in the first round.

Aduana were in pole position to win the Premier League this season and will consequently represent Ghana in the Champions League next season as they topped the standings as at match week 15 when the championship was initially just temporarily suspended because of Covid-19 fears.