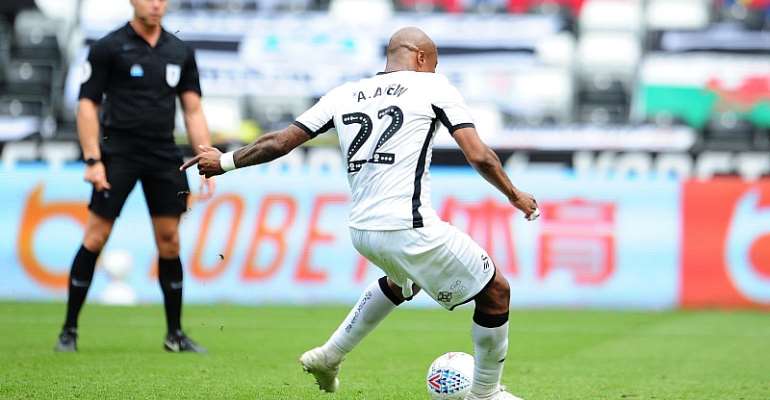 Swansea City talisman, Andre Dede Ayew has expressed his delight after finding the back of the net to help his team defeat Sheffield Wednesday in the English Championship.

The Lower Division sides were in action earlier this afternoon to honour a date on Matchday 41 of the 2019/2020 season. A pulsating encounter that ensued between the teams resulted in the home team bagging all 3 points.

First, teen forward Rhian Brewster scored to hand Swansea City the lead before Andre Ayew converted a penalty kick to double the lead for the side.

Though Sheffield Wednesday managed to score in the final minutes of the counter, it could not stop the home team from cruising to the vital win.

Sharing his thoughts after the game, Andre Ayew who places emphasis on the 3 points says he is delighted to have found the back of the net.

“Always good to score but most importantly 3 points.. still in we keep going! love to see my bro Mike back”, the forward has posted on his Twitter page.

This season, the Black Stars asset has made as many as 38 appearances where he has scored 14 goals and provided 6 assists.

‘Sputnik-V procurement contract must be re-examined’ – Kwaku...
38 minutes ago

Getting Sputnik-V vaccines from black market using middlemen...
38 minutes ago