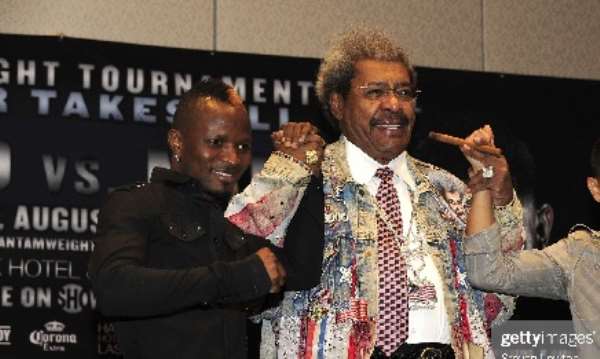 Seven years after losing to Guillermo Rigondeaux, Joseph Agbeko has accused a former promoter, Don King, of shortchanging him despite not contributing to his preparation for the bout.

The former International Boxing Federation (IBF) bantamweight champion recounted how a longstanding legal battle between him and Don King in 2011 affected his concentration ahead of the Rigondeaux bout.

Agbeko lost a unanimous decision to the Cuban in 2013 but believes events leading to the fight made him lose even before entering the ring.

In an interview with Daily Graphic, Agbeko revealed that Don King managed to take 50 per cent of the fight purse with Rigondeaux despite not having a formal contract with him.

“It was a pathetic story for me because I didn’t make much from the Rigondeaux fight. I had a longstanding legal battle with Don King who was my promoter at the time.

“I managed to take the case out of court because I was spending too much and nothing showed that the ruling would go in my favour,” he said.

“I didn’t fight for two years because of the legal tussle so I returned home to fight Luis Melendez before taking up the bout with Rigondeaux.

“It was supposed to be the biggest in my career but I ended up losing everything,” he lamented.

Agbeko said he prepared well for the fight under the late Roger Mayweather but he was not in the right frame of mind to win, knowing well the purse was already gone.

“It was a terrible incident for me at the time. I went into the fight just for the appearance and not to win,” he pointed out.

Agbeko is currently ranked third by the WBO in the bantamweight, having won the WBO Africa title and defended it three times.

‘Sputnik-V procurement contract must be re-examined’ – Kwaku...
52 minutes ago

Getting Sputnik-V vaccines from black market using middlemen...
52 minutes ago