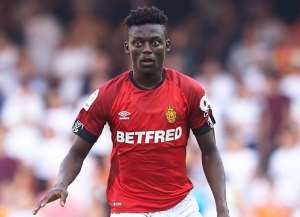 Ghana’s Baba Iddrisu could be the surprise replacement for Thomas Partey at Atletico Madrid as the club prepares for the departure of their midfield enforcer.

The Madrid club are said to be keeping the taps on Iddrisu who plays for Real Mallorca and has been in fine form this season.

Partey has been in serious demand by Arsenal who are ready to trigger his 50m release clause in order to price him away from the Wanda Metropolitano.

PSG are also said to be interested in the signature of the Ghanaian but it is believed that he is a strong admirer of the Premier League and could give his consent to the London club.

With the imminent exit of Partey, it is believed that Atletico have started the search in the event that he moved to Arsenal.

Atletico are said to be following the exploits of the 24-year-old for some time now but with the increasing possibility of Partey leaving during the next transfer window has forced them to now consider a serious option of bringing Iddrisu as a replacement for his Ghanaian compatriot in midfield.

Real Mallorca would be playing Atletico Madrid at the Wanda Metropolitano on Friday and Iddrisu would love to impress Diego Simeone in order to make the transfer move possible.

Iddrisu has played 58 games since joining the Palma-based club in 2018 and continue to prove his worth in the heart of the field.