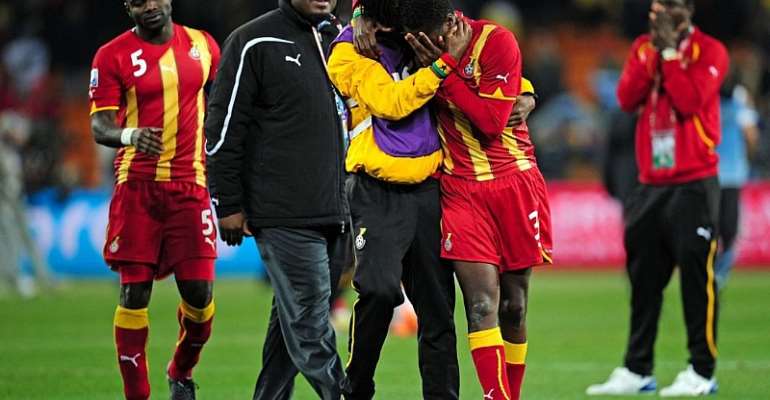 Ghana’s all-time goalscorer, and the African with the most goals in the Fifa World Cup, achieved many things in his glorious career. But he may always be remembered for one penalty miss.

It is quite difficult, especially for Ghanaians, to come to a conclusion on how Ghana should be remembered for their performance in the 2010 Fifa World Cup.

There was the quality football, the march to the quarterfinals that drew remarkable support from the rest of the continent and the making of reputations. But there was also the sense of failure, the feeling that once again when presented with the chance to reach the last four of the World Cup for the first time, an African team blew the opportunity.

Ghana’s journey in 2010 is a story every African football fan is familiar with. As the only team from the continent left standing in South Africa, the Black Stars were within one penalty kick of becoming the first country from the continent to reach the semifinals of the tournament after Cameroon (1990) and Senegal (2002) couldn’t break the quarterfinals ceiling.

After taking the lead through Sulley Muntari just before halftime, the Black Stars lost it to a Diego Forlan stunner. Then the game just drifted away till the final minutes of extra time. A Ghana free-kick caused chaos in the Uruguay box, Dominic Adiyiah headed what looked like a goal-bound effort but Luis Suarez was on the line and stopped it with his hand.

Penalty for Ghana. Red card for Suarez. Delight for the crowd. Up stepped Asamoah Gyan whose penalties had secured the four points, against Serbia and Australia, that took Ghana to the knockout stage. There was no way he was going to miss it, right? He did, striking the ball against the crossbar to take the match to the penalty shootout that Ghana lost.

In Ghana, everyone remembers where they were when they were overcome by the sheer shock of seeing Gyan miss that penalty. The team was traumatised, moving from joy to dejection. Instead of victory laps, they broke down in tears on the field after the final whistle. Those tears continued to the dressing room and the players emerged into the mixed zone looking painfully sad.

“There were a lot of tears, I won’t lie. We hardly said a word to each other there,” right-back John Paintsil told New Frame.

The morning after, on 3 July 2010, Gyan told me how relaxed he now was, how mentally strong he was and that life had to go on. Ten years later, that attitude has not changed. “I always go back and watch the penalty,” Gyan says. “I shake my head when I see it. I wish we could go back and have the penalty but life goes on. Many great players have missed penalty kicks but life goes on. It’s something that I would never forget.”

Gyan refuses to let the pain of the missed penalty cloud what he considers the bigger picture. And for him that is two-fold. First is that South Africa put on a stunning party and shamed the critics and second how the competition and that year generally changed him.

“For me, 2010 was the most exciting World Cup I have seen,” says Gyan, who has played and scored in three World Cups: in Germany (2006), South Africa (2010) and Brazil (2014). “It was unique. We saw the fans from everywhere, the emotions, the pride of the continent, the food and everything. It was amazing.”

On a personal level, Gyan truly announced himself to the world, earning a breakthrough move to the English Premier League side Sunderland after spells in Italy and France. His international career was also beginning to pick up. He arrived at the World Cup having scored three goals to take Ghana to a first Africa Cup of Nations (Afcon) final in almost 20 years. He was slowly redeeming himself from a miserable 2008 Afcon where he was so heavily criticised that he threatened to leave the team camp.

“2010 changed my life. It was the best year of my career. Music, business, contracts, winning awards. I became an icon for people. I was on top of the world and living the life I could never forget,” Gyan said. “It started from the club side. I was in top shape, physically. Mentally, no injuries. Obviously this World Cup made me a household name and famous in the world.”

For all the claims by Gyan that “we were obviously in the form of our lives,” the Black Stars for much of the tournament walked a tightrope. In the opening game against Serbia, they required a late Asamoah Gyan penalty to win. Then against Australia, Gyan scored from the spot again in a 1-1 draw. Defeat to Germany in the final group game meant a few nervous minutes before the Black Stars learnt they had qualified for the quarterfinals. Then it took a Gyan stunner in extra time against the United States to send the Black Stars through to the quarterfinals, becoming the only African country to make it out of the group stages.

Stephen Appiah, who captained Ghana in the 2006 World Cup and played in 2010, calls the side that came to South Africa the best Ghana squad that he has been part of because “we had so much quality on the bench. You took a player out and it was as if nothing had happened”.

Gyan remembers the immense support Ghana got from the continent and feels the team really blew a big opportunity to make history. “We were that confident. We were doing the right things on the field and it looked like we were even going to win the World Cup. That’s how confident I was.”

One of the consolations for Gyan the morning after the Uruguay defeat was to claim that “this team is young and in 2014 we would do better.” It didn’t happen. In 2014 Ghana did worse, turning their World Cup campaign into a bitter and disastrous experience plagued by money issues and in-fighting.

For many people, that is just the problem. Ghana and many African countries seem unable to build on previous World Cup strides. Cameroon have not made it out of the group stage 30 years after they became the first African country to reach the last eight of the tournament. After their remarkable run in 2002, Senegal did not reach another World Cup until two years ago.

It has been a similar story for Ghana. The disappointment and shame of Brazil 2014 was followed by failure to reach the 2018 World Cup. Also, in that time, the country has not won the Africa Cup of Nations. And careers that were expected to blossom off the back of that competition have drifted away.

Asamoah Gyan was a one-season hit in England before he went to play in the United Arab Emirates where he scored more than 100 goals in his two stints. Dominic Adiyiah went from within a fraction of scoring a goal to take Ghana into a World Cup semifinal to a journeyman. He now plays his football in Thailand. Samuel Inkoom has struggled too, as has Isaac Vorsah.

Despite this fall from grace, there is no doubt that in 2010 Ghana stepped up in style. The streets of Pretoria sometimes felt like Oxford Street in Accra’s Osu and the players responded on the field. No wonder the day after the Uruguay game, amid the tears and bitter disappointment, the players drove through Soweto to complete adulation. They also met Nelson Mandela in what Gyan called the ultimate congratulatory gesture towards them. They then returned to Accra to a proud and big welcome.

None of us would forget South Africa 2010 in a hurry because it reminded us of Ghana’s immense football abilities, even though it also exposed its innate weakness in the sport too.