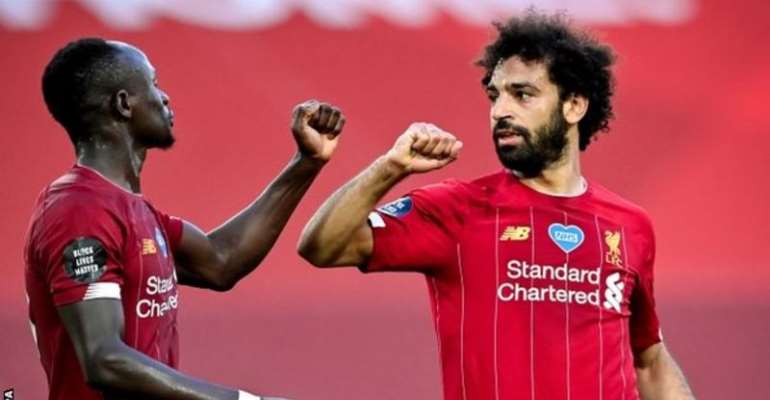 Salah has won the Premier League golden boot in the past two seasons, last year sharing it with team-mate Sadio Mane and Arsenal's Pierre-Emerick Aubameyang

Mohamed Salah says he wants to stay at Liverpool for "a long time" and thinks the club can still "achieve more".

The forward, 28, is the Reds' leading goal scorer this season, playing a key role in the club sealing a first league title for 30 years last week.

The Egyptian joined Liverpool in 2017 and has also won the Champions League and Club World Cup with the Reds.

"I can't describe my feelings after we won the league after 30 years," Salah told BeIN Sports.

"I'm very happy. I enjoy the atmosphere here. I love this place and I hope to stay for a long time.

"The atmosphere here is different to any other place."

Salah has scored 92 goals in 145 games since joining Liverpool, including 21 in 41 games this campaign.

He signed a new five-year contract in July 2018 but has occasionally been linked with a big-money move away.

Liverpool are 23 points clear at the top of the Premier League with seven games remaining and could break the record points total in a Premier League season, currently held by Manchester City, who they play on Thursday.

"We have adapted well as a team and our understanding is perfect," Salah said.

"If this continues, we can achieve more. It's difficult to maintain our current level, but it's not impossible."