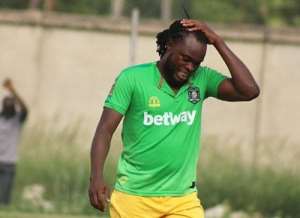 The nation's football governing body has announced the current campaign will be rendered null and void following uncertainty over the coronavirus shutdown.

Asante Kotoko and AshantiGold have been chosen as the country's representatives for the CAF Champions League and CAF Confederations Cup respectively after the 2019-2020 Ghana Premier League was cancelled.

A statement by the FA reads, "The Executive Council also decided that per the relevant provisions of the CAF inter-club football Regulations, Asante Kotoko SC and AshGold SC will represent Ghana in the CAF Champions League and the Confederations Cup respectively."

But the decision has not gone down well with Aduana Stars live-wire who has questioned the reason behind the decision, saying that his outfit and Medeama SC deserve the nod ahead of the two chosen clubs.

“I don’t have a problem with the two clubs that have been selected to represent Ghana in the Champions League and Confederation Cup. However, are these two clubs ready to go and lift the flag of Ghana high?” he quizzed.

“In fact, at the moment no Ghana Premier League club is ready for Africa. The FA would have to select the top 18 players in the GPL to represent Ghana in those competitions.

He preferred another alternative to ensure Ghana’s reps perform well on the continent.

“Based on the preparation of clubs Aduana and Medeama should have the nod to represent Ghana. Those teams are very well prepared,” he ended.

EC To Proceed With One-day Registration Exercise Despite NDC...
2 hours ago