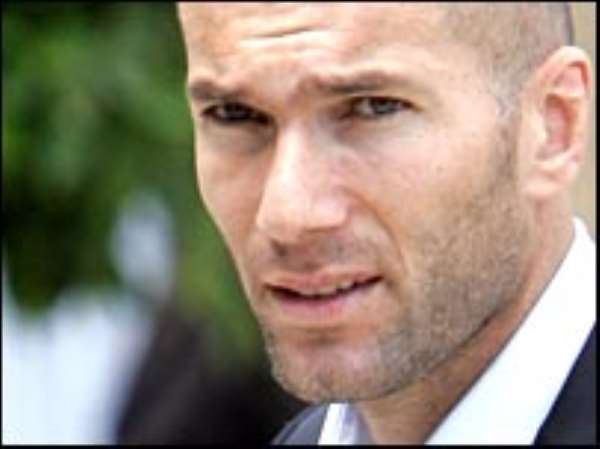 Zinedine Zidane should be allowed to keep the Golden Ball Award for the World Cup's best player, according to Marco Materazzi, the man he headbutted.
France skipper Zidane was sent off in extra-time of the final after launching himself at the Italian defender.

Fifa is investigating the incident and have summoned both players to attend a hearing on 20 July.

But Materazzi said: "Zidane has won that award because of what he has done on the pitch - he was the best."

The World Cup final was Zidane's last match before retirement but Fifa president Sepp Blatter has hinted Zidane, 34, could lose the award.

He gave France the lead from the penalty spot but was not around to repeat the trick in the shoot-out having been sent off late in extra time.

Materazzi cancelled out France's opening goal with a header, and having been floored by Zidane, stepped up to convert one of Italy's five spot-kicks that secured their title.

"In fact I have one of his shirts in my closet - we exchanged our shirts after a Juventus v Perugia game."

"My only real provocation was to stop him.

"Earlier, he had come close to scoring (with a header) and our goalkeeper Gianluigi Buffon had made a superb save.

"After holding his shirt, I wasn't the first to speak."

The Inter Milan player also hit back at accusations he over-reacted after the incident.

"I could have expected a verbal reaction but not to be headbutted," he said.

"It's not true what (French coach Raymond) Domenech said, that I made a big drama out of it."

Zidane has apologised for his headbutt but does not regret his actions, alleging on television that Materazzi provoked him by insulting both his mother and sister.

"It was inexcusable," he said. "I apologise, but I can't regret what I did because it would mean that he was right to say all that."