Coco Gauff: The 16-Year-Old Tennis Star On Secrets Behind Her Special Potential 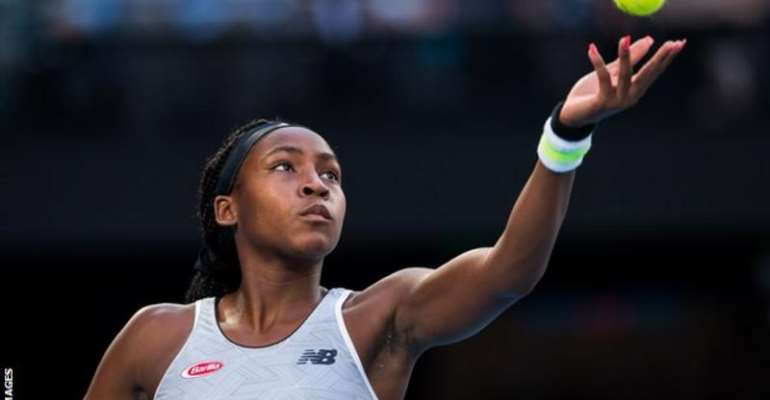 One of the least surprising things Coco Gauff can tell you is that she started to learn to drive at 13.

Of course, she did. After all, this is the American teenager who last year stunned five-time champion, Venus Williams, in the first round of Wimbledon - and then astounded the public by taking all the hype in her stride.

By the time she turned 16 in March this year, Gauff had won her first tour-level singles title, knocked defending champion Naomi Osaka out of the Australian Open, broken into the top 50 and become a powerful voice speaking against racial inequality.

Her poise, eloquence and maturity beyond her years have won many admirers. And you really don't need to look too far to see where she has got it from.

On 1 July, 2019, a 15-year-old American stepped out on Court One to face her idol Venus Williams at Wimbledon.

Those who follow the stats might have noticed Gauff had become the youngest player to qualify for the main Wimbledon draw since the Open era began in 1968. Others were asking the press office whether to pronounce her name 'Gawf' or 'Goff' - it's the latter - and no matter how they were pronouncing her surname, they were still calling the teenager by her given name, Cori.

But a 6-4 6-4 win over a player who had won four Grand Slam titles before she was even born changed everything - Coco had arrived.

She became the hot ticket as she progressed through the rounds, saving two match points against Polona Hercog to reach the last 16. There she lost to eventual champion Simona Halep, leaving to a standing ovation from a crowd who had been well and truly charmed.

Gauff made a lasting impression, not only with the pundits who predicted a trophy-laden future but also with the public who saw a humble teenager who was "thankful for the experience" and planned to merely buy a new hoodie with her £176,000 prize money. 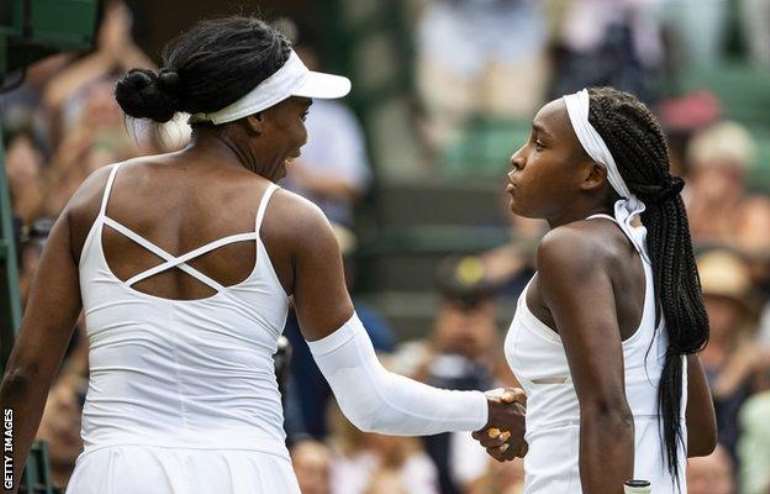 "I went from probably 30,000 followers [on social media] to 500,000 overnight, and definitely got a lot of recognition from really famous people all around the world," she tells BBC Sport.

"It's something I'm still not used to but definitely wasn't used to then."

Yet she handled the media spotlight like an old hand, unfazed by her 'promotion' to the biggest news conference room, usually reserved for the top names, and not intimidated by her billing on the show courts or the players she faced.

At least that's what it looked like from outside. She tells it slightly differently.

"I was really nervous - don't get me wrong - I didn't look nervous but I was nervous inside," she says of the victory over Williams.

"My parents always taught me to be calm in those moments and remember that pressure is a privilege. That's what I remembered during those moments."

Gauff's parents Corey and Candi were seen cheering wildly from their seats as they watched their daughter's big moments. Her mum's celebrations even went viral.

They had given up a lot, in a family gamble along the lines of the Richard Williams model, whose daughters Venus and Serena's training was kept in-house amid his certainty they were destined for huge success.

It is her family that is keeping her grounded and motivated.

"My determination to win is one thing that always drives me, and also my brothers - to inspire them to get up and work hard. I know they look up to me so I try to be a good example," she says.

It seems her younger siblings are as switched on as she is. 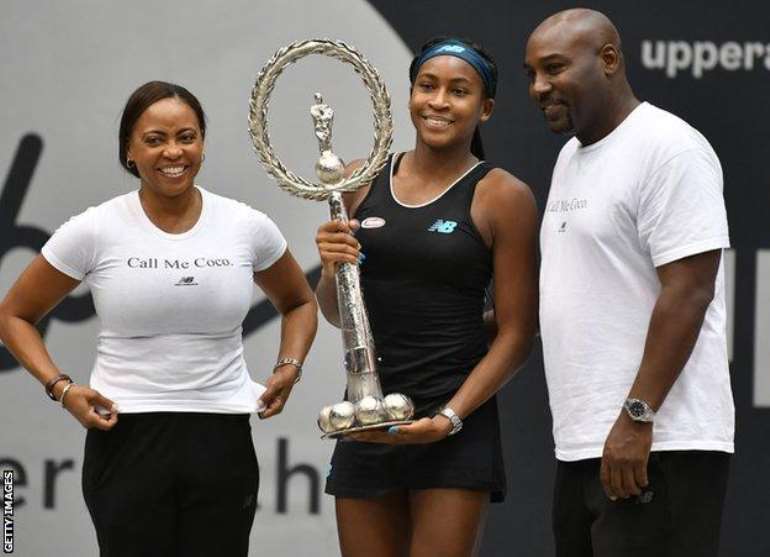 Gauff, pictured with her mum and dad after winning her maiden WTA title in October

"Every time I go to a tournament I ask them what they want. From Australia my youngest brother Cameron said he wanted a shark tooth necklace and my other brother Cody, he's 12, asked for 1% - or it may have been 10% - of my prize money. He is so money-orientated, which is not a good thing!

That 10% would amount to 30,000 Australian dollars (£17,000) after Gauff reached the fourth round in Melbourne. She knocked out defending champion Osaka in straight sets in the third round having again beaten Venus Williams in round one.

She then lost to eventual champion Sofia Kenin in three sets having taken the opener but had once more proved she could stand toe-to-toe with players she had looked up to for years.

She has a photo of herself as a youngster going to the US Open as a fan, where Venus Williams is playing in the background on Arthur Ashe Stadium, while she also has a signed tennis ball from Serena.

Now she's the one being mobbed for autographs and interviews.

It is not just on the court where Gauff is coming face to face with her heroes. One of her favourite people to meet was Michelle Obama.

"She gave me really good advice," she says. "She's a big inspiration to everyone across the world, not just because she was the First Lady. She continues to push boundaries for women of colour."

A lot of those words could apply to Gauff herself. 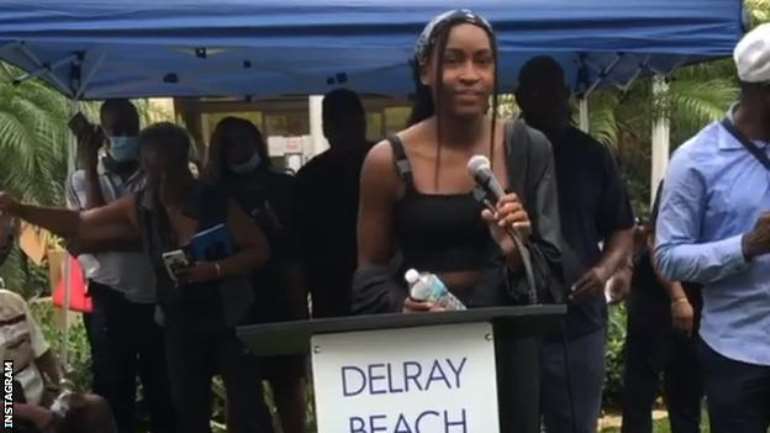 "No matter how big or small your platform is, you need to use your voice," Gauff says

Earlier this month she made headlines with an emotional speech at a Black Lives Matter protest in her home town of Delray Beach, Florida, saying "we need to take action" and that it is "sad" she was protesting against the "same thing" her grandmother did "50-plus years ago".

She even appeared to challenge Roger Federer to do more when, in a response to the 20-time Grand Slam champion's 'Blackout Tuesday' black square social media postmarking George Floyd's death in police custody in the United States, she shared a link with him on 'Ways to Help'.

A powerful video she posted about the killings of African-Americans asks "Am I next?" and on her Twitter feed she says: "I promise to always use my platform to help make the world a better place."

She is not even old enough to vote yet.
None of this has come as any surprise to her mentor, Serena Williams' coach Patrick Mouratoglou, who first met Gauff when she was 10 and who believes she is "different" to other players.

"At 14 she was more mature than women on tour who are 25," he told the Guardian earlier this month. "That's incredible. She has an inner strength that is completely unusual." 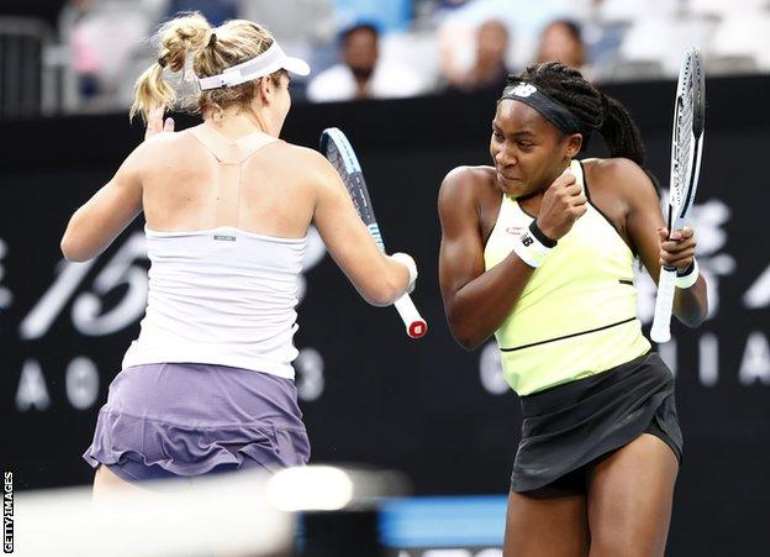 Gauff, celebrating women's doubles victory in the Australian Open's third round with Catherine McNally in January

There is still a reassuring reminder from Gauff that she does nevertheless still know how to be a teenager. She has been enjoying making TikTok videos during the lockdown and getting her parents to join in with the dances. She has also been learning French and reading a lot of books.

And while she has enjoyed the extra time at home she is now ready for the WTA Tour to resume in August after it was suspended in March because of the coronavirus pandemic.

"I'm ready to get back on court and travel again - I like travelling more than I like staying home," she says.

The first Grand Slam after the restart will be the US Open, followed just a fortnight later by the rescheduled French Open. Many people will be wondering just how far she will go this time.

"She has the ability to be the greatest player ever, even better than Serena and I never thought I'd say that," BBC presenter and former French Open champion Sue Barker says.

"Serena is without question the best so far. Coco has all the attributes, physically, mentally, she has the game, she's going to be superstar, with the press she is so engaging, she has just got absolutely everything.

"If she can start winning Grand Slams by 18 then who knows how many she could win. We're seeing Serena desperately trying to equal Margaret Court's record [of 24 Grand Slam singles titles] - Coco could outdo that and I never thought that would happen."

Venus Williams declared "the sky is the limit" for the young American, while former Wimbledon champion John McEnroe said last year he would be "absolutely shocked" if she was not numbered one in the world by the time she is 20.

Gauff, who won her maiden WTA title in Linz in October, does not talk in those terms though.

"I definitely feel pressure but not so much because of my past results, just because I always put pressure on myself on the court. Lately, it's not been pressure to win but just pressure to have fun and make sure I play the right way," she says.

That is because she knows how damaging the wrong kind of pressure can be, having admitted earlier this year to feel "depressed" because of the "pressure that she needed to do well".

"I was experiencing this maybe just before Wimbledon happened because that's when I first transitioned onto the pro tour," she says now. "I didn't really know what to expect or what to do, juniors and pros to me was a completely different experience because you go from being number one junior to being not even ranked in the pros. And it takes a lot to build your ranking up.

"When I let all of that go and didn't focus too much on numbers that was when Wimbledon happened and my results really went up. I think that time and that moment in my life definitely prepared me to have that breakout at Wimbledon."

It could also be that she finds herself more prepared than many players to deal with what will be a very different-looking tennis tour when it resumes - but for different reasons.

The US Open will be taking place behind closed doors, meaning no raucous home crowds cheering her on.

She's also got an added incentive to do well in these events as she will finally get her driving licence in November. She may want to upgrade from a hoodie to a car with any prize money.

Apart from chasing Grand Slam titles, she has just one more little thing to sort out: "Once I learn how to park, everything will be perfect."