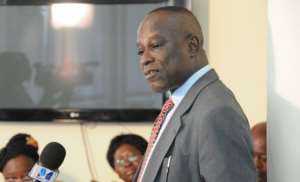 Former Kotoko Board member, Kabral Blay-Amihere, wants the 2019/20 Ghana football season annulled since protocols of the coronavirus were not being met.

Following teh outbreak of the virus, football activities in the country have come to a standstill since mid-March.

The Ghana Football Association (GFA) will, however, make a final decision on the future of football on tomorrow, June 30.

The country's football governing body were hoping for the resumption of football after a proposal was tabled before the government Covid-19 team.

However, the ban on contact sports has been extended by President Akufo Addo.

And Mr Amihere, the Ghana Football Association (GFA) must consider the complex issues regarding the pandemic before taking a firm decision to either truncate or continue with the league.

According to him, abiding by all protocols and regular COVID-19 testing should be considered first before the GFA takes that crucial decision to avoid the spread of the pandemic.

“Those countries who have started football are obeying the COVID-19 protocols. If the country (Ghana) wants to start the league, they should learn to implement the proper measures before starting the league," he told Asempa FM,

“There is no seriousness on protocol measures put in place before we start the pending league and I think we are not ready to continue it,” he stressed.

The two times board member further revealed that when football was active, supporters were not going to the stadium and now that people are demanding for the league to continue behind close doors, it would be difficult for clubs to finance their expenses.

“South Africa is said to continue their league; they have put in all the protocols to ensure the safety of players. They have an element of sponsorship to ease their financial burden but we don’t have such.

“If you say King Faisal should continue the league, it will be a tough demand on their financial status so Ghana’s issue is a very hard task,” the former Envoy and National Media Commission chairman explained.

“Before football revived in Europe, there was a weekly testing of players and officials. Before they started, everyone knew their status but what has the country done so far with regard to this?

“The safety of the players is overlooked which will be a disaster if we continue it,” he added.