Bernard Mensah Score For Kayserispor In 2-0 Win At Sivasspor 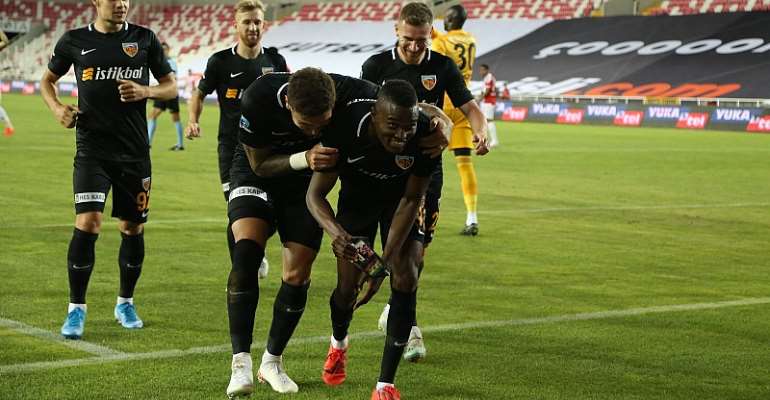 Ghanaian international, Bernard Mensah scored for Kayserispor this evening when the team defeated Sivasspor 2-0 in the Turkish Super Lig.

The relegation-threatened went visited the Yeni Sivas 4 Eylul Stadium in hope of recording a win to boost their chances of survival at the end of the season.

Right from the blast of the first-half whistle, Kayserispor made their intentions known as they pushed for an equalizer.

Having impressed, the away team finally took the lead on the stroke of halftime when Pedro Henrique assisted Hasan Huseyin Acar to score.

Though Sivasspor came in strong in the second half, Kayserispor held on and wrapped up the win with a second goal in the final 10 minutes of the game.

Poster boy Bernard Mensah stepped up and converted a penalty to double the lead for the away team as they bagged a crucial 3 points at the end of the match.

The 25-year-old midfielder has been key for his team all season and now has 5 goals on top of 8 assists after making 23 appearances.

Today’s win keeps Kayserispor on the 16th position of the Turkish Super Lig but the same points with the team above, Yeni Malatyaspor.

Another win in the team’s next match could see them moving out of the relegation zone.