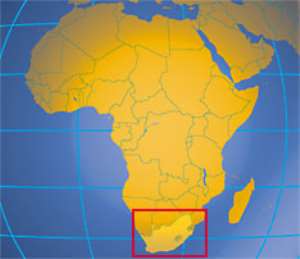 Attention is beginning to shift to the next World Cup extravaganza to be held in South Africa in four years' time. Africa colonised a corner of Berlin on Friday as the emblem for the 2010 event was unveiled, in the presence of the South African president, Thabo Mbeki, and the United Nations Secretary-General Kofi Annan.

African singers, dancers and percussionists drummed up enthusiasm, while a narrator told us the story behind the emblem. It began, she disclosed, "in the ancient mists of time".

The logo was revealed and it did, indeed, seem more inspired than the bland creations usually displayed by sporting tournaments.

It features a player about to perform a bicycle kick, against a background of the African continent, half of which is painted in the colours of the South African flag.

The designer, Gaby de Abreu, told the BBC News website he had tried "to capture the essence of what the World Cup in 2010 is all about ... the flair of African football, with the bicycle kick.

"We had to show it was very celebratory as well, that there's a lot of emotion there."

But the event was not really about the badge - it was an unofficial handover to South Africa for the next World Cup.

It is South Africa which will now face four years of intensifying global scrutiny.

Germany has pulled off a highly acclaimed tournament. Now people want to know whether South Africa match it?

It will be, after all, probably the biggest event ever staged in Africa, and the first World Cup held outside the so-called "first world" for more than two decades.

"We said we will host in 2010 the most successful Fifa World Cup and we will keep that promise," he declared.

Tumi Makgabo, the presenter of Friday's ceremony and a member of the 2010 organising committee, played down comparisons with Germany's achievements.

"We're not trying to put together a German World Cup," she told the BBC News website. "This is supposed to be a South African experience."

But while the organisers want to stress that the next World Cup will come with an African flavour, they are at pains to insist that South Africa can manage the tournament as well as Germany, Japan or France.

Alongside the African masks on the walls of the Tempodrom venue in Berlin were phrases like "expanding infrastructure", "tourism" and "sector investment".

Even the story narrator, while eulogising "magic and beauty" and "ancient wisdoms", somehow managed to weave in the words "modern technology".

Michael Sutcliffe, who runs the civil administration in Durban, which is likely to host a semi-final, says: "We'll bring world-class organisation, of that I've got no doubt.

"We'll also bring fashion, and colour and life, and variety and diversity. As a country we're full of that vibrancy, and we'll bring that to the World Cup."

Sifiso Cele, sports editor of Johannesburg's Sunday Sun, says that the media will scrutinise how the run-up to the World Cup is managed.

But he is equally convinced that South Africa will pull off a great tournament.

"South Africa has proved we are able to host mega events," he says.

The media and trade unions and others have demanded that while huge investment goes into the World Cup, essential projects like housing and social welfare are not neglected.

Mr Cele feels the transport networks in South African cities may be the weak link in the programme.

But he is in no doubt that South Africans are behind the project.

"When the announcement was made the whole country jumped," he says.

It is a feeling echoed by another South African in Berlin. Thabo Tolo is the assistant choreographer for Afrika! Afrika!, an acclaimed musical and dance extravaganza that aims to present a continent united by art and culture.

He is pleased by South Africa's promise that 2010 will showcase the whole of Africa.

"All eyes will be on Africa now, and all Africans will support South Africa."

The organisers of the next World Cup clearly start out with a great deal of confidence and goodwill from the public and media.

Mzimasi Mgebisa, managing editor of South African broadcaster SABC Sport, has no doubts about the management.

"Nothing will go wrong," he asserts.

His biggest concern is not whether the World Cup will be an organisational success.

Nor is he diverted too long by Kofi Annan's praise of the "universal language of football", or Thabo Mbeki's "human solidarity".

Rather, he has the same worry as every other football fan worldwide.

"If you go back 10 years we won the African Nations Cup in 1996," he says, adding that the years since then have seen a consistent decline.

"Do we have enough time over the next two or three years to put up a team? I'm in doubt of that."

We’ll Vote Skirt And Blouse, Mark Our Words; We’re The Mover...
6 hours ago