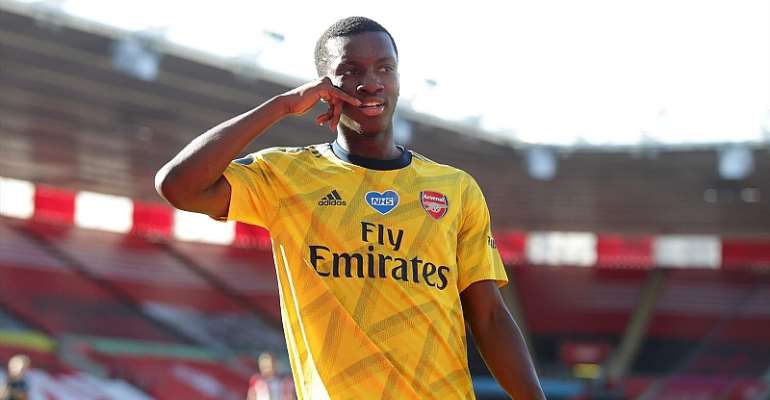 Eddie Nkethia of Arsenal celebrates after he scores a goal to make it 1-0 following a mistake from Alex McCarthy of Southampton during the Premier League match between Southampton FC and Arsenal FC at St Mary's Stadium Image credit: Getty Images

Eddie Nketiah took advantage of a howler from Southampton stopper Alex McCarthy as Arsenal claimed their first win following the Premier League's resumption with a 2-0 success at St. Mary's.

The Gunners had endured a miserable return to action with consecutive defeats at Man City and Brighton respectively but steered their bid to end the season in the European places back on track with a solid showing on the south coast.

Mikel Arteta's side hit the woodwork through Pierre-Emerick Aubameyang before Saints stopper, McCarthy contrived to pass the ball straight to Nketiah, who gleefully ran the ball into an empty net on 20 minutes.

Southampton dominated the ball but stand-in keeper, Emiliano Martinez only really had to deal with one troublesome drive from Shane Long as the Saints slumped to a 10th league home loss of the campaign.

Arsenal put the seal on victory late on when substitute Joe Willock tucked in a rebound after Jack Stephens was shown a straight red card for bringing down Aubameyang.

Arteta and Co will now turn their attention to Sunday's FA Cup quarter-final at Sheffield United before hosting Norwich in the league next Wednesday. Southampton travel to Watford on Sunday evening.

The EC Of Ghana Will Not Joke With The Faith Of Ghanaians. W...
22 minutes ago