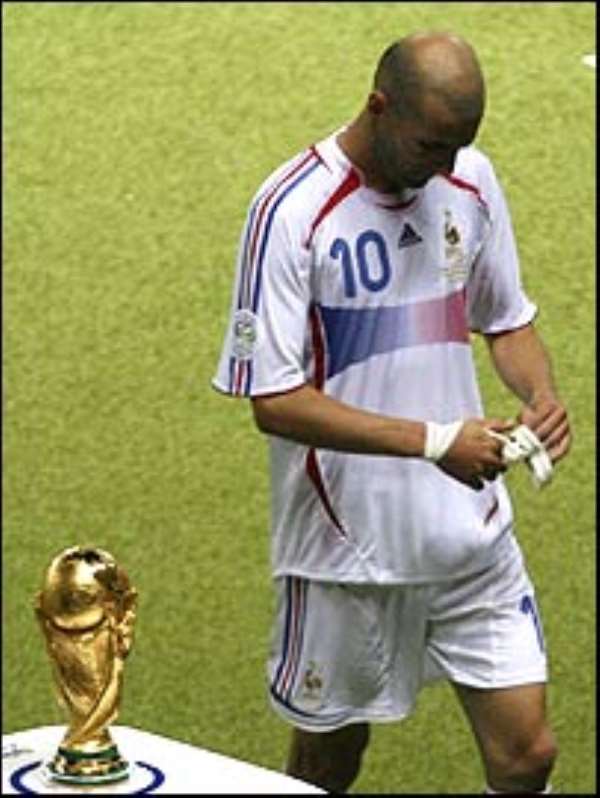 There was no fairytale ending to Zinedine Zidane's storybook career on Sunday.

The 34-year-old Frenchman steps down from his position as the greatest player of his generation, having tasted success at World Cup, European Championship and Champions League level.

But alongside his three World Player of the Year awards and his La Liga and Serie A titles, Zidane's career will be forever remembered for a moment of madness on the world's biggest stage.

It was a night when his reputation was tainted forever - when he showed he could not control his temper like he can a football.

An ugly departure for someone whose artistry so often lit up the beautiful game.

But as disappointing and shocking as it was, it was not the first time the dark side of France's flawed footballing genius has emerged.

Zidane grew up in a tower block in a poor estate in Marseille, known mainly for its high unemployment and suicide rate.

He once admitted his "desire never to stop fighting is something else I learnt in the place where I grew up".

Zidane overcame early rejection - he was born to Algerian parents but the Algerian national coach said he was too slow. His boyhood idols Marseille judged him not good enough.

Instead he got his chances with Cannes, and then Bordeaux, before Juventus came calling, and there he won two straight Serie A titles and reached successive European Cup finals.

The midfield maestro finished on the losing side on both occasions, but any disappointment at the defeat by Real Madrid in the 1998 final was soon erased with France's World Cup victory on home soil that summer.

Zidane emerged as France's inspiration after a two-match ban for stamping on Saudi Arabia skipper Fuad Amin in the group stages.

Skipper Didier Deschamps put his indiscretion down "to his Mediterranean character, which he cannot always control".

A regretful Zidane explained: "'My nervousness and my conduct were due principally to the pressure I have been under. I will learn."

He may not have learned his lesson but he was quickly forgiven and his two goals in the final sealed the trophy.

Zidane's image was projected onto the Arc de Triomphe and the French public called for him to be made president.

France and Zidane added the European title in 2000 and the following year he was off to Real Madrid for a world record fee of £46.5m.

But his final season at Juventus was soured by a five-match ban for headbutting Jochen Kientz during a Champions League game with Hamburg.

Without their talisman Juve crashed out of Europe at the group stages.

Such moments failed to stop Zidane's rise and at Hampden Park in 2002 he finally got his hands on a Champions League medal after a stunning volleyed winner.

The 2002-2003 season saw him win the last of his three World Player awards and his one and only La Liga title with Madrid.

That was the final season of silverware of his career as his powers began to fade and he bowed out of international football after Euro 2004.

He went back on that decision in time to help Les Bleus to qualify, but the group stages in Germany suggested it was a major competition too far for an out-of-sorts Zidane.

However, he played the knock-out stages as if his life - and not just the prolonging of his career - depended on it.

France coach Raymond Domenech pleaded with him not to retire after he almost single-handedly dismantled Brazil in the quarter-finals.

But after his final fall from grace how will Zidane, voted the best European player of the last 50 years by Uefa in 2004, be remembered in France?

Xavier Rivoire of France Football magazine told BBC Sport: "He was an amazing player but at the same time I believe what he did against Italy is also what he will be remembered for.

"There is a history of violent conduct - it's not the first time he has been expelled, it has happened many times before.

"He will be remembered for all the good things has done but for many people he can never be put at the level of (1980s legend) Michel Platini because of Sunday night."

France's president Jacques Chirac did not totally agree, preferring to remember Zidane for what he had done for the country and displaying "the greatest human qualities".

And French fans also turned up in their thousands to cheer Zidane as well as the team on their return to Paris on Monday.

But Sunday was still a final reminder of the human frailty of a player who so often looked like he was from another planet.

Chereponi: I’m humbled by this opportunity to serve — DCE no...
12 minutes ago

Ablakwa to file two urgent questions again over cost of Akuf...
21 minutes ago