Italy Are World Champs • For The 4th Time 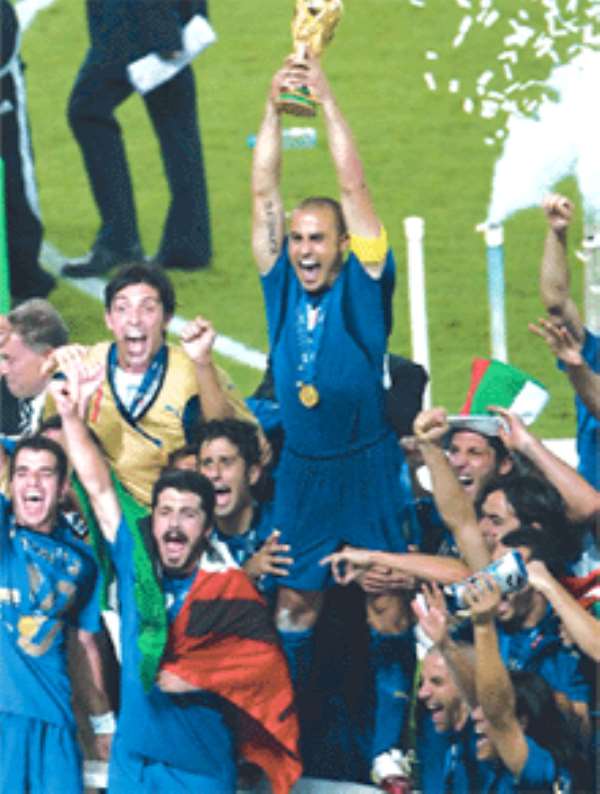 
Italy last night became Europe's first team to lift the World Cup a record four times, just as they were the first to win it first and second times before any other European side ever dreamt of it.

They achieved the feat after beating off a French challenge 5-3 on penalties after a 1-1 draw in regulation time in the final of Germany 2006 at the Berlin Olympic Stadium, the same arena where their Olympic team carried off the football trophy from Austria 70 years ago.

Following their successes of 1934, 1938 and 1982, the Azzurris have now edged closer to the all-time world record of five wins by Brazil, arguably the team to have disappointed most people at this tournament for failing to reach the last four.

The Italians stayed the course tightly, unbeaten in all seven matches and only conceding their second goal last night in the 1-1 drawn game in normal time and after extra-time.

But the Italians must have French captain Zinedine Zidane to thank for his unsporting behaviour that saw his dismissal in the second half of extra time to curtail the apparent strength they were exerting on the game.

Argentine referee Horacio Elizondo, who had the honour of being in charge in the opening match of Germany 2006, did not disappoint spectators with the closing assignment as well, his athleticism making him to be close at every action on the pitch.

And the evidence of this was when he red-carded the much-idolised French captain Zidane for stupidly headbutting Italian defender Materazzi after 108 minutes.

Incidentally, both Materazzi and Zidane were the marksmen for the two teams on the night, Zidane scoring first for France from the penalty spot in the seventh minute after Materazzi fouled Malouda in the box, and the Italian defender atoning for that error with a headed goal from an Andrea Pirlo's cornerkick in the 19th minute.

As the game wore on France always looked the more dangerous but Italian goalie Gianluigh Buffon pulled off great saves from Thierry Henry, Zidane and the troublesome Malouda.

France had the misfortune of losing key midfielder Patrick Vieira through injury after 56 minutes but his replacement Alou Diarra was a super-sub as he played intelligently.

However, when French coach Raymond Domenech decided to pull out Henry for David Trezeguet after first half of extra-time that also proved suicidal as the Italians tactically guided the game towards the penalty shoot-out.

And when it finally arrived, the French were obviously handicapped with quality shooters.

It was a tearful night for French fans who had come in their numbers rooting for a second World Cup triumph by their side in eight years, their first coming only when they hosted the tournament the second time in 1998.