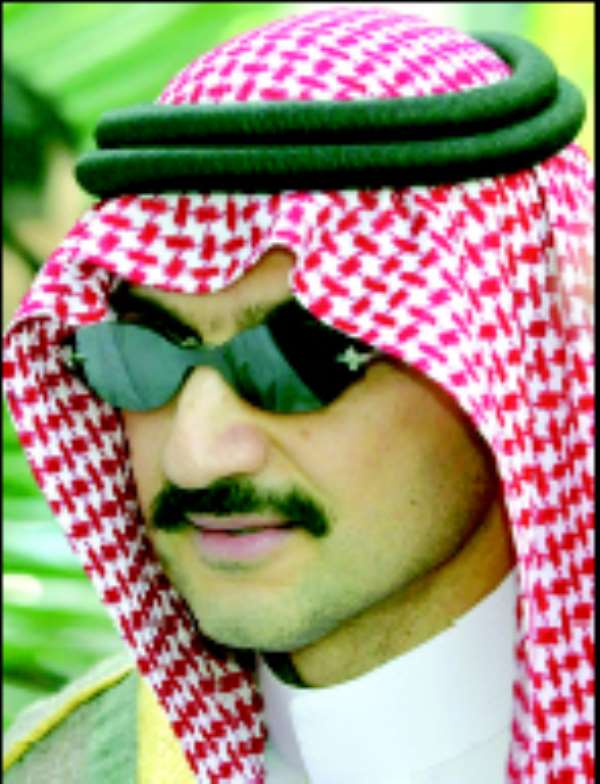 The Saudi Prince, His Royal Highness Al-Waleed Abdul Aziz Al-Saud has honoured the $100,000 pledge he made to Ghana's Black Stars when they beat USA to qualify for the second round of the 2006 World Cup.

Mr Jude Bucknor, the Prince's business representative in Africa, who presented the cheque to the Ghana Football Association (GFA) on the Prince's behalf yesterday said, the donation was in appreciation of the Stars' sterling performance at their maiden appearance at the World Cup.

His Royal Highness has been a close associate of Ghana, and the Stars' participation at the World Cup was therefore of immense interest to him.

“The Prince is really proud of the Stars performance and he gives the donation in appreciation,” Mr Bucknor said.

He said the Prince also acknowledged Ghana's potential and said with the right efforts and resources, the Stars would be capable of achieving greater heights in world football.

Receiving the cheque on behalf of the team and the GFA, Papa Owusu Ankomah, Minister for Education, Science and Sports thanked the Saudi Prince for his gesture and said it was a big vote of confidence in the Stars, Ghana and Africa as a whole.

Papa Ankomah observed that the positive things that had happened to the country since the Stars' participation and performance at the World Cup was such so valuable that money could not buy.

He said the ministry will together with the GFA, build and improve upon the success chalked up in Germany so as to achieve greater laurels in the future.

He was hopeful that the Prince's interest in Ghana sports would further strengthen the bond between Ghana and Saudi Arabia.

Stars' captain Stephen Appiah who was at the ceremony with Michael Essien, Sulley Muntari and deputy skipper John Mensah, said they were honoured to have won the favour of the Saudi Prince.

Our members are dying, pay us – Contractors lament
37 minutes ago