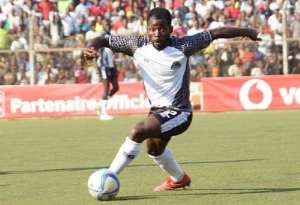 Ghanaian players stranded in D.R Congo are calling on the government to initiate plans of evacuation to ensure they return home safely.

Quite a number of players from the West African country have been stuck in the Central African country for the past four months when the Coronavirus crisis hit the country.

According to TP Mazembe attacking midfielder Torric Jebrin, he has not been paid by his club for the months football has been suspended in D.R Congo.

The story is the same for other Ghanaian players in the country with the likes of Isaac Amoah and Zakaria Mumuni stressing in an interview with Accra-based Angel FM that they are in distress with the current unrest in the country.

The stranded players are now calling on the Ghana Football Association (GFA) and the government to come to their aid and evacuate them back home.

“The government needs to send a flight to come and take us back home because what is going on here is very dangerous and scary”, ex-Hearts of Oak midfielder Torric Jebrin told Angel FM.

The players say they have already contacted the Ghanaian embassy in D.R Congo but have so far not heard any good news. They believe the only option now is for the government to send a flight to bring them back home.

This situation is similar in Ethiopia where Ghanaian players including Lee Addy, Muntari Tagoe, and other players are also stranded.