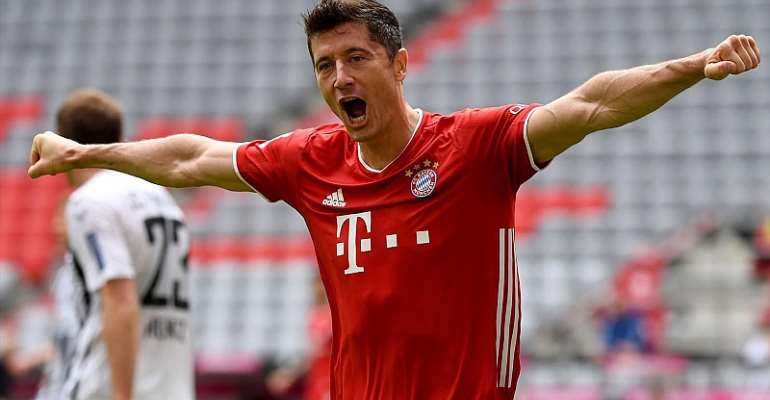 Two goals from Robert Lewandowski ensured champions Bayern Munich made it 12 Bundesliga wins in a row for the first time since 2014 after a 3-1 victory over Freiburg on Saturday.

With their eighth-straight Bundesliga title already sewn up, Bayern took the lead in the 16th minute through Joshua Kimmich, before Lewandowski netted his 32nd goal of the season in the 24th minute to double his side’s advantage.

Jonas Holer’s tap in nine minutes later did make a game of it for a moment, but this Bayern team do not relent, and three minutes later Lewandowski, who else, restored Bayern’s two-goal advantage.

Bayern took their foot off the gas in the second half, cruising to another three points that keeps them 10 points clear atop the Bundesliga with one game to play.

Victory over Werder Bremen last Tuesday made sure of that 30th German title for Bayern, but Hansi Flick, while rotating a few, still named a strong side against Freiburg, and immediately first-team regulars Lewandowski and Kimmich combined to give Bayern the lead.

Soon enough it was two, with Muller’s shot well saved, only for the predator extraordinaire Lewandowski to pounce to head home from close range.

Holer’s back-post finish out of nowhere was then immediately cancelled out by Lewandowski, who just cannot miss at the moment.

After the break, Freiburg pressed to get back into it, with Luca Waldschmidt having three openings after coming off the bench, but the result was never in doubt.