Imoro Ibrahim Begs For Food Due To Unpaid Salary, Bonuses At Kotoko 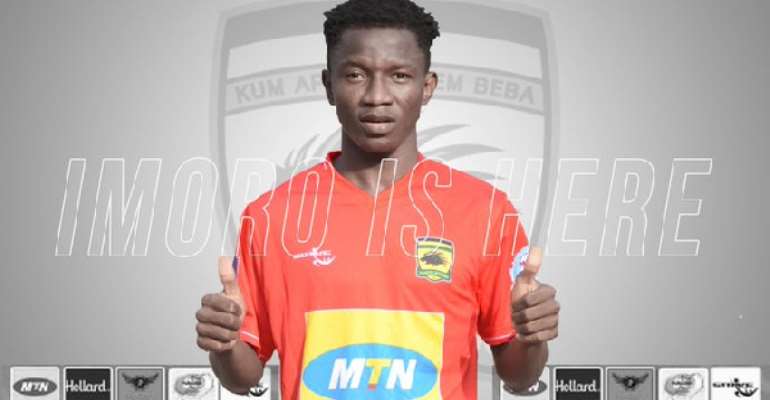 The President of Thunder FC, Alhaji Abdulai Anass has alleged that defender Ibrahim Imoro has resorted to begging for food to eat due to unpaid signing on fee, salary, as well as bonuses by Asante Kotoko.

The Ghana Premier League giants completed the signing of the full-back from Thunder FC on a 4-year-deal right before their opening match of the season against Techiman Eleven Wonders in December 2019.

According to Alhaji Abdulai Anass, Asante Kotoko agreed to pay GHS80,000 for the player but has up to date failed to honour that agreement.

Speaking to Kumasi FM, the football administrator has revealed that Ibrahim Moro is suffering at the club as a result and continues to beg for food from his teammates to survive.

“Many clubs wanted to sign Ibrahim Imoro but I decided to give him to Kotoko because it is the club I support. I was promised I will be paid the GHC 80,000 before the season ends but not a penny has been paid to me till now.

“My player Imoro Ibrahim calls me every day for money to buy food because his salaries and bonuses have not been paid.

“He has to resort to Habib Mohammed for food because of his affiliation with him. There are more revelations to the issue I wouldn’t want to address on live radio”, the Thunder FC President has shared.

Information gathered indicates that the Coronavirus (Covid-19) crisis is one of the reasons why the management of the Porcupine Warriors are yet to settle the player's signing on fee.

This season, Imoro Ibrahim has been outstanding for Asante Kotoko where he has featured in 11 goals whiling finding the back of the net once.