Tursi Is Too Big, Give Me My Size – Yarkor Chavez 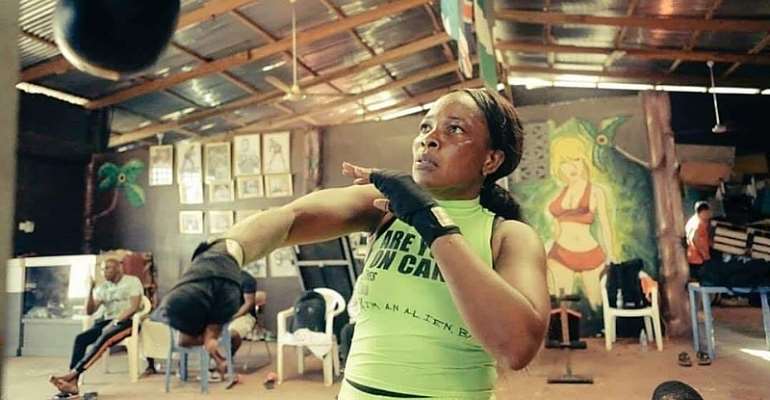 Naa Yarkor Chavez Annan, Ghana premier female boxer has called on the promoters of her impending post Covid-19 Boxing Showdown to give her an opponent in her weight class.

Speaking to Yours Truly on the up coming fight scheduled for the last quarter of the year, she noticed that Diana Tursi from Switzerland may be heavier than her.

“I am a bantamweight, and I can see from the poster that my opponent may be a middleweight. I weight 53 kg and I suspect her to weigh over 80 kg, so I am appealing to the promoters to give me my size, who I will beat very well” she said.

According to Yarkor Chavez, the first female boxer in Ghana to come out boldly to declare her choice to box, she has been cheated on weight any time she fought outside Ghana, and she is now wise, so it can never happen in Ghana.

She said the promoters can find an opponent for Diana if she insists on fighting a Ghanaian, so that they give her a bantamweight boxer who is also 53 kg.

“I am never afraid of her, I fear no one, because I am a Ga, and we were born to fight, I am a warrior, but the right things must be done. Boxing is fought under rules and regulations, so we should apply the rules. Even if it is a catchweight contest the difference is too much because I am 53 kg and she is over 80 kg” she explained.

Dons Promotions in collaboration with Pro Fighting Factory want to bring some excitement to the Bukom Boxing Arena after the war against the coronavirus in December.

Since the bout was hinted, many boxing fans have shown interest, and started saving.

Naa Amerley Commey, a journalism student who loves watching boxing said it would be exciting to see Yarkor Chavez in action again after so many years.

Meanwhile Yarkor has intensified her training hoping to give Ghanaian boxing fans a good performance.