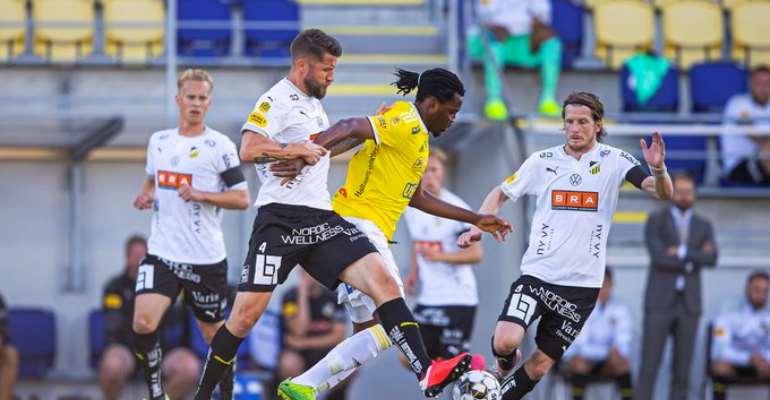 Ghana and Falkenbergs FF striker Kwame Kizito is set for a lengthy spell on the sidelines after suffering a serious knee injury.

The former Accra Hearts of Oak forward was in action for his club last Monday when they played their first match in the Swedish Allsvenskan against his former team, HB Hacken.

After 69 minutes of action, Kwame Kizito had to be stretched off after receiving what appeared to be a very painful knock.

Following an MRI Scan on Tuesday night, it has been uncovered that the striker has sustained a cross-band and meniscus injury.

Falkenbergs FF medical doctors are estimating that the Ghanaian forward will spend at least 8 months on the sidelines which means he is likely to miss the entire 2020 football season in Sweden.

“He injured the front cruciate ligament and meniscus on the outside of the knee. Now surgery is first awaited and then rehabilitation for eight to twelve months. Unfortunately, Kwame Kizito misses the rest of the season.

“He is sad and does not want to speak in the media”, Sverker Nilsson who is a team doctor at Falkenbergs FF has said.

This comes as a big blow to Kwame Kizito who had in a pre-season interview expressed his desire to score more goals this season.