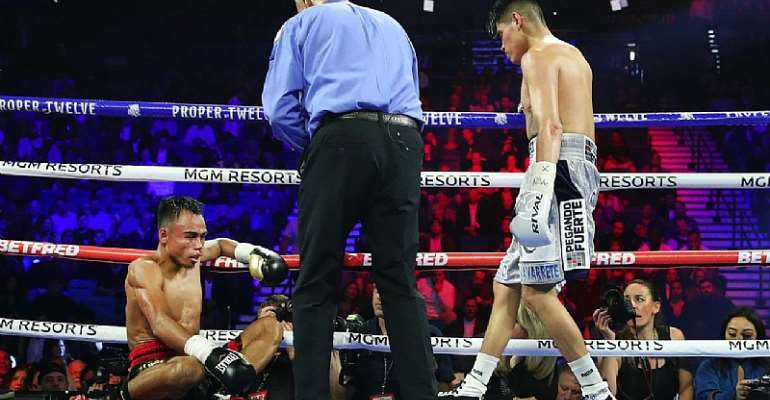 Emanuel Navarrete is being tossed a softball opponent in journeyman Uriel Lopez (13-13-1, 6 KOs) in a 10-round non-title bout next Saturday, June 20 on ESPN+ at the Gimnasio TV Azteca, Mexico City, Mexico.

Navarrete (31-1, 27 KOs) is moving up to featherweight to take on the 25-year-old Lopez in a match that probably won’t last long.

Top Rank should have picked a better opponent for the 25-year-old Navarrete because his one-sided matches are starting to disappoint boxing fans, which his opponents as no-name guys brought in to make him look good.

Lopez has lost six out of his last nine fights since 2016, and it’s unclear what the rationale is for him being selected to fight on ESPN+ against Navarrete. Boxing fans pay for the ESPN+, and they probably won’t be too pleased if Navarrete crushes Lopez.

Navarrete is coming off of a one-sided 12 round unanimous decision win over Santisima on February 22 on the undercard of the Deontay Wilder vs. Tyson Fury II rematch at the MGM Grand in Las Vegas.

Given that Jeo Santisima easily beat Lopez, it doesn’t make much sense for Navarrete to be taking on Lopez. I mean, he might as well take on Jeo again for a repeat that no one wants to see. But then still, fans don’t want to see Navarrete destroy a guy like Uriel Lopez even more so.

Navarrete is a good fighter, as we saw in his two wins over former WBO super bantamweight champion Isaac Dogboe. Still, he’s not being matched against the right opposition to test him.

It’s believed that if WBO 126-pound champion Shakur Stevenson vacates his title soon and moves up to 130, then Navarrete will go after the strap.

If Navarrete stays at 122, he should go after one of the champions in the division like Rey Vargas or Murodjon Akhmadalie. Those would be good fights for Navarrete. At 126, Navarrete has a lot of great options available to him, as long as Arum is willing to let him take some risky fights.

The logical move for Navarrete at featherweight would be for him to face #1, Michael Conlan, for the WBO title once Shakur Stevenson vacates the belt and moves up to 130. Stevenson is expected to stay at 126 until he faces IBF champion Warrington in a unification match. However, if that fight doesn’t take place this year, then Shakur will move up to 130 and go after Arum’s champions Miguel Berchelt and Jamel Herring.

Navarrete’s fight against Lopez will take the cake and give new meaning to the word mismatch. It would have made a lot more sense for Top Rank promoter Bob Arum to have matched Magdaleno against Navarrete or Stevenson-Navarrete. At least with those fights, it would be interesting to see who would have their hand raised at the end of the battle.

Arum has been comparing Shakur with Floyd Mayweather. It wouldn’t be surprising if Navarrete beats Stevenson, and that put Arum in a bad position where he would have to explain what happened.

High Court shoot down Agordzo's application to travel
57 minutes ago

ASEPA to file RTI request for minutes of Justice Dotse-AG 'S...
57 minutes ago