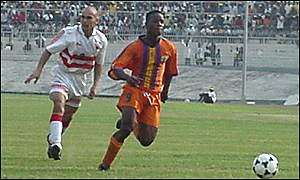 Former Accra Hearts of Oak attacker, Lawrence Adjah-Tetteh has paid tribute to the club as he stresses that they made him who he is.

The offensive midfielder played for the Ghana Premier League giants in the 2000s and was part of the side that defeated arch-rivals Asante Kotoko in the finals of the CAF Confederations Cup in 2006.

Speaking to Ashaiman TV, Adjah-Tetteh has stressed that he owes everything he achieved in football to Hearts of Oak and will never speak ill against the Accra-based side.

He shared, “It was Hearts of Oak who made me Adjah Tetteh, I always eat with the Hearts brand, I'll never speak ill against the club. Why should I be going around telling people Heart owe me? Who am I before joining Hearts?".

Lawrence Adjah Tetteh netted the vital goal in the second leg of the CAF Confederations Cup final against Kotoko in 2006 before the Phobians eventually went on to win on penalties.

He additionally helped the club to win other laurels and is today regarded as one of the best players of the Rainbow family in their history.

Show Me One School, Hospital Akufo-Addo Has Built, He Is Now...
1 hour ago