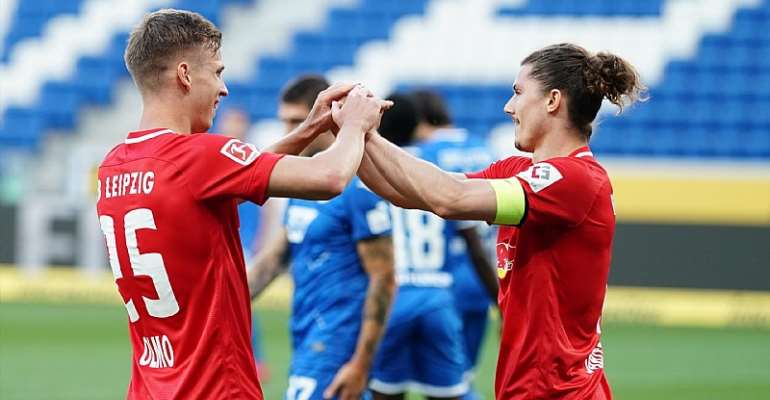 RB Leipzig moved a step closer to sealing their place in the Champions League after Dani Olmo's double gave them a 2-0 win at Hoffenheim.

Moments after Hoffenheim had a penalty decision reversed by VAR early on, Olmo handed the visitors a lead following a rapid counter-attack. The impressive Spain international quickly grabbed a second in similar fashion two minutes later.

Timo Werner missed a glorious chance to give Leipzig a three-goal lead moments before half-time, while Hoffenheim improved in the second half but squandered their opportunities as the visitors went on to seal all three points.

The result means RB Leipzig are a now just a single point behind second-placed Borussia Dortmund, while Hoffenheim's Europa League hopes have taken a hit. The coachless club remain in seventh, outside the European spots, and two points off Wolfsburg.

It took just five minutes for the drama to unfold as Leipzig goalkeeper Peter Gulacsi was thought to have pulled down Moanes Dabbur in the box. But after a lengthy consultation with VAR, referee Tobias Welz reversed his decision because of a handball from Christoph Baumgartner in the build-up.

Moments later and Olmo gave RB Leipzig a surprise lead against the run of play. Nordi Mukiele picked out the onrushing Spain international, who showed great composure to skip past two blue shirts before stabbing home.

Fast forward a whole two minutes and the highly promising 22-year-old tucked his second into the same corner after Marcel Sabitzer kept the ball in play with a clever header.

The first half continued at a frantic tempo with Gulacsi forced into making a double save six minutes from the break, denying Denis Geiger and Baumgartner from ten-yards out.

And just before the interval, Chelsea target Werner was sent through clear on goal by Konrad Laimer. Yet even with time on the striker's side, he somehow lifted the ball over the bar.

Hoffenheim started the second half brightly in an increasingly scrappy affair. The hosts were beginning to test Gulacsi more as Sebastian Rudy forced the ex-Liverpool goalkeeper into a smart save in the 52nd minute.

However it was Leipzig who provided the more threatening opportunities with Angelino having a goal chalked off for offside and substitutes Christopher Nkunku, Ademola Lookman and Amadou Haidara all testing Oliver Baumann late on. Nevertheless, it was Olmo's first-half double that proved pivotal in a high-octane clash.