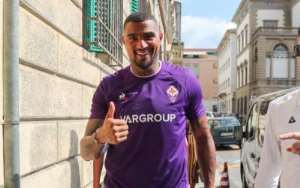 Turkish Super Lig giants Besiktas has failed to reach an agreement to permanently secure the services of Kevin-Prince Boateng, Modernghana Sports can report.

The German-born Ghanaian international joined the club on a 6-month loan deal from Italian Serie A side Fiorentina in the winter transfer window.

Though he played just 6 matches before the football season was suspended in line with lockdown directives from the Turkish government to curb the spread of the Coronavirus, the forward managed to make an impact.

Due to that, Beskitas officials have in the last couple of months been trying to tie Kevin-Prince Boateng down to a permanent contract.

His loan contract from Fiorentina stipulates that he is to earn an annual salary of 1.7 Million Euros if he is signed on a permanent basis at the end of the loan spell.

During negotiations, Besiktas asked for a discount while presenting an offer of 1.2 Million Euros.

Following considerations by KP Boateng and his agent, they presented a counter-offer of 1.3 Million Euros to try and see to it that the move happens.

Failure by Besiktas to meet that demand has put an end to the contract talks with the former Sassuolo star man expected to return to Italy to play for the Viola next season.