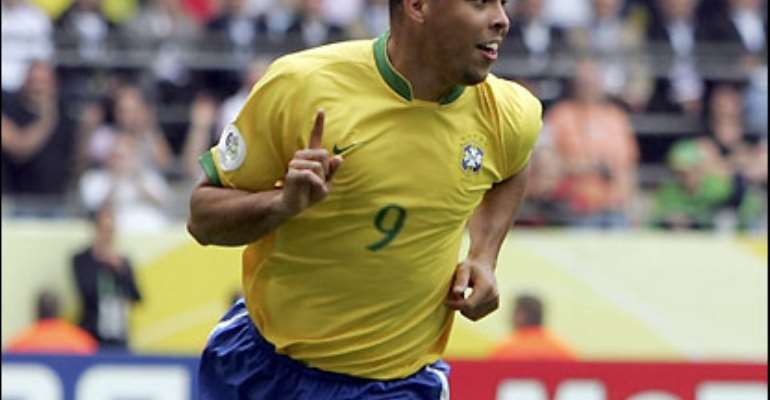 Ronaldo has gone ahead of Gerd Muller's World Cup mark

Ronaldo became the highest scorer in World Cup finals history as Brazil beat Ghana to book a quarter-final place against France.
The 29-year-old took just five minutes to go past Gerd Muller's tally of 14, latching on to Kaka's through ball and rounding Richard Kingson to slot home.

Adriano tapped in Cafu's cross and Ze Roberto ran through to wrap it up while Ghana's Asamoah Gyan was sent off.

John Mensah had the Africans' best chance, but Dida saved his header.

Brazil will now meet France in the last eight on Saturday in Frankfurt at 2000 BST.

The scoreline was perhaps a touch harsh on Ghana, who recovered from a horror start to match their more illustrious opponents.

It was a start made more remarkable by the African side's defensive naivety than Brazil's attacking prowess, as twice in five minutes they got caught out at the back.

The first time they were saved by a flag incorrectly ruling Ronaldo offside, the second time they pushed up and allowed Kaka to feed in Ronaldo, who shimmied past Kingson and slotted in.

After all the criticism, it was yet another record-breaking goal for the peerless Real Madrid man.

Still Ghana failed to learn. Ze Roberto found Adriano in acres of space only for the striker to fluff his lines, trying to round Kingson but falling to the floor and being booked for a dive.

Brazil began strolling - if they needed a reminder they were in a game Matthew Amoah's 20-yard drive that flew just wide should have done the trick.

But it did not seem to, as Amoah shot straight at Dida and then Gyan turned Lucio superbly before rifling over on the stretch from 12 yards.

Two minutes before half-time, they had a golden chance to level. Mensah rose unchallenged from a corner, but to Ghana's dismay his bullet header struck Dida's leg and bounced away from danger.

Just before the break they were punished when Brazil launched a quick counter-attack and Cafu crossed for a seemingly offside Adriano to bundle home.

Ghana coach Ratomir Dujkovic was so incensed that he was sent to the stands for the second half after remonstrating with the referee.

The second goal was hard on Ghana after a spirited response to their early errors and to their credit they continued to plough forward after the break.

John Pantsil flashed a header wide from another set-piece and Gyan and Haminu Draman both wildly lashed over from good positions.

As Brazil sat back Stephen Appiah fed in Gyan, but the hero of the win over Czech Republic was foiled again by an impressive diving stop from Dida.

Until Gyan was sent off - his second yellow card was for diving - Brazil did not look like adding to their tally, a Pantsil header at his own goal a rare venture into the Ghana penalty area.

But with 11 against 10 they stepped up the pace and Ghana's misery was compounded when substitute Ricardinho floated a ball over the top and Ze Roberto flicked it past Kingson, ran round him and rolled into an empty net.

The defending champions are slowly but surely clicking into gear at this World Cup finals.