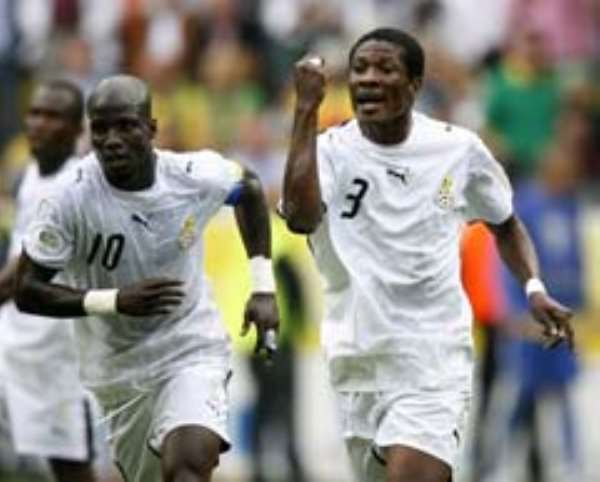 Ghana's Black Stars succumbed to the Selecao of Brazil in an entertaining match at Dortmund that saw the World Champions run out 3-0 winners.

The Africans got off to the worst possible start when Kaka's pass allowed Ronaldo to beat the offside trap and round Richard Kingson before toe-poking the ball home in the 5th minute. It made 'The Phenomenon' the leading goal scorer in World Cups, overtaking Gerd Muller's previous record of 14 goals.

Just 8 minutes later it was Adriano's turn to run free of the Ghanaian defence, but he made a mess of his chance and was booked for diving

when he tried to win a penalty from Kingson's challenge.

Ghana gradually crept back into the match, with the Black Stars first real shot in anger being Haminu Dramani's fierce long-range shot that Dida was forced to tip over. As their confidence grew, the Africans looked more and more dangerous. Stephen Appiah's excellent pass allowed Matthew Amoah to turn and shoot just centimeters wide and Asamoah Gyan also fluffed a good chance under pressure from Emerson.

John Mensah was desperately unlucky when his towering header was blocked by the shins of Dida; the Brazilian keeper knew nothing about the powerful effort and was lucky enough to merely be in the right place at the right time.

Just when it seemed as if the Black Stars were sure to make their pressure pay, Brazil sucker-punched them on the break with a controversial goal just before half time. Kaka was again at the heart of the move, sending Cafu clear down the right flank and allowing the Brazilian captain to place a fine cross in towards Adriano. The burly striker awkwardly placed the ball home with his thigh but he seemed to have been in an offside position when Cafu played the cross.

Brazil were definitely flattered by the 2-0 score line at the break.

The Selecao looked determined to add to the score line in the second half and it took a good save from Kingson to deny Roberto Carlos in the 57th minute after some good build-up play by Kaka and Ronaldinho.

Gyan aimed a shot for the far post in the 69th minute but Dida pulled off a superb diving save before recovering to ensure that Amoah had no chance for a follow-up effort.

John Pantsil almost put through his own net when he misdirected a clearing header from Juninho's cross, but Kingson spared the blushes of his defender with a good save.

Any slim chance Ghana had of getting back into the match were snuffed out by the dismissal of Gyan for his second caution of the match with just under 10 minutes of regulation play left. Just 2 minutes later, Ze Roberto raced free from his defensive position to touch the ball past Kingson before tapping home to rub salt into the Ghanaian wounds. The move may have seen 25 glorious passes put together by the Brazilians but the score line was unduly harsh on Ghana's brave Black Stars.

Kingson produced some outstanding saves in the dying minutes to halt the Brazilian landslide, but Ghana can be proud of their efforts at Germany 2006.