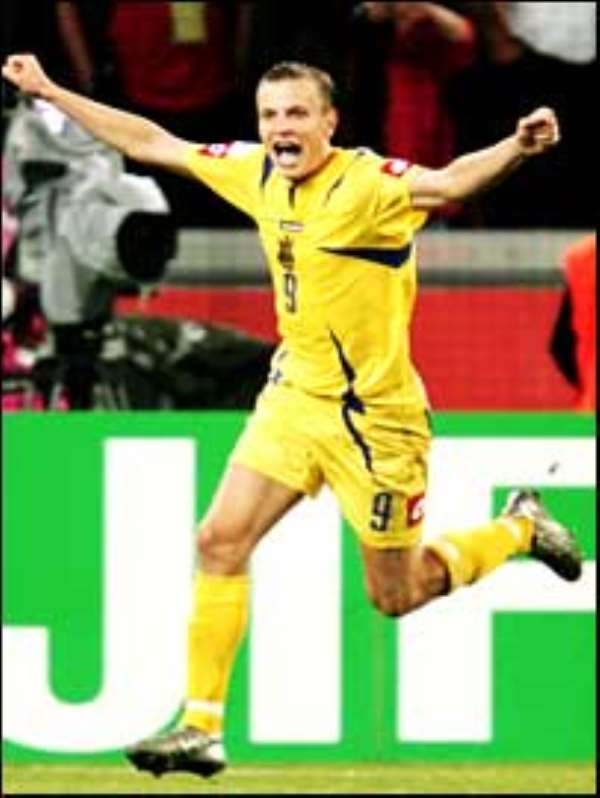 Ukraine reached the quarter-finals after beating Switzerland on penalties.
The Swiss missed three spotkicks, but Ukraine's Artem Milevskiy, Serghiy Rebrov and Oleg Gusev made no mistake to seal a 3-0 shoot-out victory.

During normal time Ukraine's Andriy Shevchenko glanced a header against the bar, while in reply Alexander Frei rattled the woodwork with a free-kick.

Competing in their first World Cup finals, Ukraine now meet Italy in the quarter-finals in Hamburg on Friday.

Shevchenko missed Ukraine's first penalty in the shoot-out, but as Marco Streller, Tranquillo Barnetta and Ricardo Cabanas failed with tame efforts, the Eastern European side progressed to the last eight.

Ukraine goalkeeper Olexandr Shovkovskiy saved the penalties of Streller and Cabanas, while Barnetta hit the bar with his spot-kick.

As they exited the competition Switzerland set two records.

Given Ukraine had lost their opening group game 4-0 and this is their first World Cup, Oleg Blokhin's side have regrouped impressively to reach this stage of the competition.

In a tightly contested match both teams found it difficult to create clear openings in the penalty area, with the game's best chances coming from set pieces as well as some powerful long-range shots.

Raphael Wicky tested Shovkovskiy early on with a rising shot, while a hammer effort from Shevchenko flashed past the post midway through the second half.

In the absence of the injured Philippe Senderos, the task of keeping a check on Shevchenko fell to Johan Djourou.

It did not take Shevchenko long to slip Djourou's leash.

A darting run allowed Shevchenko to sneak ahead of Djourou and the Ukraine striker then showed great bravery as he threw himself at the ball to reach Maxim Kalinichenko's free-kick only for his effort to rebound off the bar.

Switzerland striker Frei showed he could be as threatening when his superbly flighted free-kick left the Ukraine bar juddering.

The ball rebounded to Barnetta, whose effort was less impressive, as he ballooned his shot wide.

Before the game went into extra-time, Ukraine twice went close from corners, as Andriy Gusin flicked a header narrowly, while Pascal Zuberbuhler sliced an attempted punch.

Ukraine also claimed a penalty after Grichting enveloped himself round Andriy Voronin after the Swiss defender came off second best in an aerial duel.

In extra-time Grichting redeemed himself when he bravely cut out substitute Milevskiy's dangerous cross.

At the other end of the pitch Gusin made a superb blocking tackle just as Streller prepared to shoot from a promising position.

Given the recent spate of yellow and red cards in the tournament this game was an altogether less explosive affair, with referee Benito Archundia not booking a player until just before the hour.

Not that the game was without its ugly moments, notably when Andriy Nesmachniy was left writhing in agony after an ugly challenge from Cabanas.

Vladislav Vashchuk was also unhappy with a Cabanas tackle as the Swiss midfielder raked his studs down the Ukraine defender's shin.