Merseyside Derby Can Be Played At Goodison Park 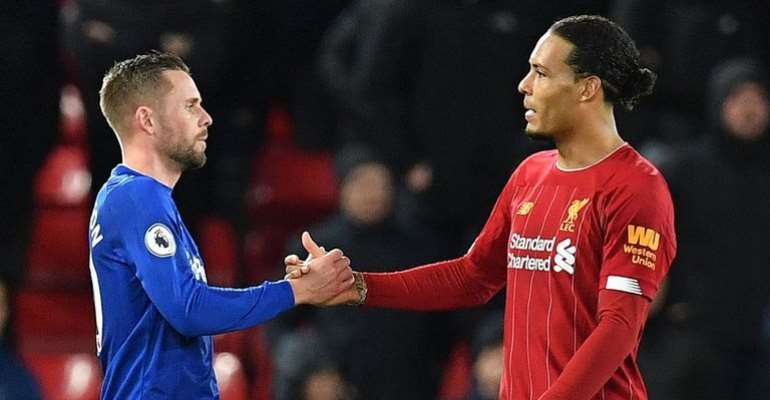 The Merseyside derby has been cleared to be held at Everton's Goodison Park stadium, while Liverpool can play home matches at Anfield when the Premier League season restarts.

The match on 21 June could be the first chance for the Reds - who are 25 points clear at the top - to clinch the title.

It was one of the games considered a risk because of fears fans could congregate outside the ground.

Southampton's St Mary's had been earmarked as a potential neutral venue.

But Liverpool's ground safety advisory group has now recommended that both Everton and Liverpool can play their remaining home fixtures "safely and securely" behind closed doors at their stadiums.

"We are confident that supporters of these two great clubs will respect safety advice about avoiding visiting stadiums where home and away fixtures are taking place," said a joint statement by Blue Union and Spirit of Shankly, supporters' groups for Everton and Liverpool respectively.

"We fully understand the importance of lockdown as a measure to control Covid-19 and would encourage fans to stay away from any stadium and avoid congregating in numbers."

Liverpool can win their first league title for 30 years by beating Everton - if second-placed Manchester City lose at home to Arsenal on 17 June.

The 2019-20 season has been suspended since March because of the coronavirus pandemic.

The group making the decision was chaired by deputy mayor and councillor Wendy Simon and included representatives from the police, fire service and both clubs' fan groups.

A safety certificate is now expected to be granted by the relevant licensing committee.

"A lot of factors have been taken into consideration, especially the safety of the players, match officials and staff in attendance," said Simon.

"We are confident the measures in place will allow the matches to be held behind closed doors without any detrimental impact to all concerned and recommend to the city council that the safety certificates for both grounds be amended to allow this to happen."

Merseyside Police had previously said they had "no objections" to the game being played at Goodison, while Liverpool mayor Joe Anderson reversed his initial opposition.

Everton v Liverpool will be one of 25 Premier League games Sky Sports will be broadcasting free to air.

All the remaining 92 fixtures will be shown live on Sky Sports, BT Sport, BBC Sport or Amazon Prime.