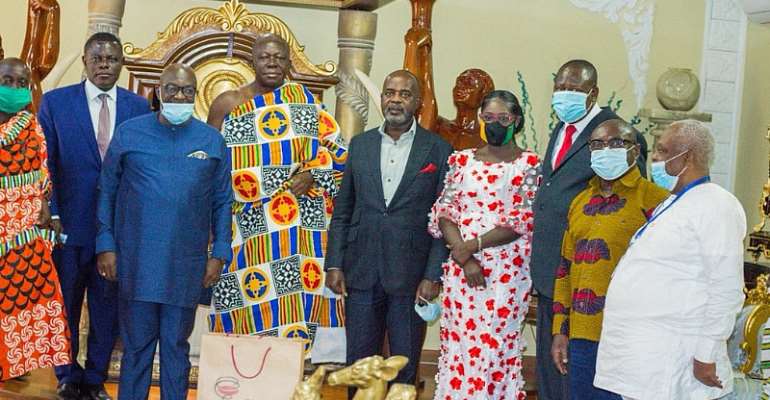 Manhyia Palace has charged the new nine-member Board of Directors to build a new stadium within the shortest possible time.

The new board was inaugurated on Tuesday, June 9 in Kumasi.

Dr Kwame Kyei is the Chairman of the board. He will be assisted by Jude Arthur, who served as a board member in 2013.

The board has already been charged to rebuild the Kotoko brand not only for its performance on the sporting field but as a viable economic entity.

But reading out the tasks for the board, Chief of Staff at the Manhyia Palace, Kofi Badu stated it makes sense that the club, which was formed in 1935, builds its own facility for matches after completing a planned academy and training facility complex project.

“Your first order is to develop the Adako-Jachie field into the best sports complex in the sub-region to contain a giant soccer academy and the best training facility complete a first-class gym, medical and nutritional and all the auxiliary things needed for such a facility.

“While implementing the academy and training facility complex, you should begin preparations for Kotoko’s own stadium within the shortest possible time.

“No doubt the Baba Yara Stadium has been a useful home for Kotoko and will continue to be so. However, going forward, it makes economic sense for the club to own its stadium even if some category of matches will continue to be played at the national stadium,” he stated.

Tema-based businessman and two-time board member Alhaji Lamine have also been brought back to be part of the new team.

Former sports journalist Evelyn Nsiah Asare, who is now Director of Sports at the Sunyani Technical University is also part of the board.

The Kotoko board, according to reports, will have a mandate for three seasons.