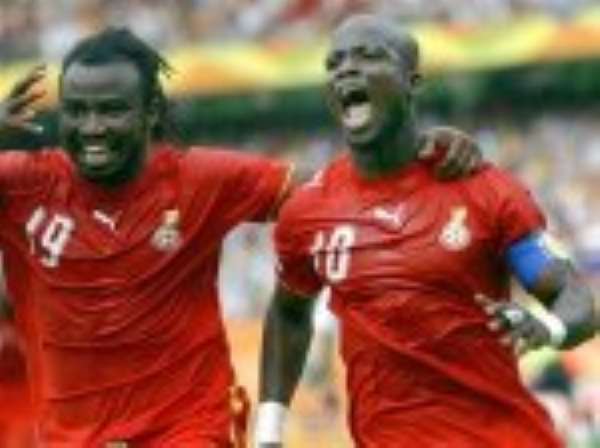 Stephen Appiah, captain of the Black Stars has described their clash with Brazil on Tuesday as the opportune time to "prove our worth".

The Stars play the South Americans in the first elimination event in Dortmund on Tuesday and the inspirational skipper said the players would fight for a decent result that would send Africans smiling and the world applauding.

The Brazilians players are said to have addressed Ghanaian players as technically and tactically indisciplined - a challenge the former Juventus midfielder underscores would aid the Stars to prove them wrong.

"Its unfortunate for players to talk like that but what they have said has even made us want to give it our last drop of blood to ensure they know they were wrong about us.

"We don't want to say much because we know the turf will decide it all. We will play it the same as we did against Czech and USA and I think it will be in their interest to ask those teams to tell them whether they are right or otherwise".

The player told the GNA Sports in Wurzburg that "we have seen and played most of their players in the champions league and other European leagues before and they must be joking to think we are afraid of them.

"We all accept they are rated as the number one but I think apart from their talking, there is nothing extraordinary about their performance at the moment".

The Brazilians must have won all three games to top their group but Appiah insists, "it is obvious who has played better between the two of us".

Against the South Americans, regarded as favourites for the tourney, the midfielder who was adjudged the Most Valuable Player (MVP) in the game against the Americans last Thursday says the team would approach the game with a positive mentality and a spirit that is willing to die for honours.

"We have played them at the junior level and understands their worth. But we wont be intimidated, because we have a strong mentality and a great approach that won't be different from the one we showed at the group stage".

The Stars are without "Bison" Michael Essien - a player whose implacable strength is considered as one of the basis of the Stars durability but the skipper insists the players are well aware of the void the Chelsea midfielder's absence would create and has resolved to work extra hard to make amends.

The team's camp has been flocked with the visits of African legends like Roger Millar, Samuel Eto'e Fils and others and Appiah is said their presence is a huge inspiration to the team ahead of the game.

Milla, Eto, Kalusha and others visited the Stars in camp and at the dressing room before their group game against the Americans last Thursday.

"They remind us of how good Africa wants us to come and we are willing to make them smile with a good game and a fine result".

In that quest Appiah urges all to pray for maximum concentration for the players.

"We know the need to concentrate to the finish and have resolved to give it 120% of concentration to enable us come flying".

Our members are dying, pay us – Contractors lament
30 minutes ago