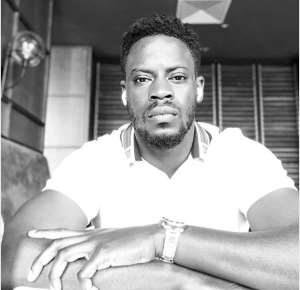 Ghana winger, Edwin Gyasi says he is a 'black man' that build and not 'destroy' as he delivers a message in the Black Lives Matter campaign.

Protests have been held globally after unarmed black man George Floyd died while being restrained by a white Minneapolis police officer on 25 May.

Floyd died after a white policeman knelt on his neck for nearly nine minutes.

The four officers involved have since been charged over the death, which sparked days of protest in the US and Black Lives Matter demonstrations across the world.

In an Instagram post, Gyasi, who plays his football in Bulgaria wrote, "I am a Black man... I build... I don’t tear down other Black men!... I have felt the pain of being torn down and I have decided I will be deliberate about building others! If I didn’t tag you, please don’t be offended. I tried to pick people I thought would do this challenge!! All too often, we men find it easier to criticize each other instead of building each other up. With all the negativity going around let’s do something positive!! Upload one picture of yourself... only you. Then tag as many brothers to do the same. Let’s build each other up, instead of tearing ourselves down.”✊🏿

This week, sports stars including Serena Williams, Paul Pogba and Lewis Hamilton have raised their voices over police brutality against black people in America.

Football clubs across have also joined the campaign.

Black Lives Matter (BLM) is an international human rights movement, originating from within the African-American community, which campaigns against violence and systemic racism towards black people.

BLM regularly holds protests speaking out against police brutality and police killings of black people, and broader issues such as racial profiling, and racial inequality in the United States criminal justice system.