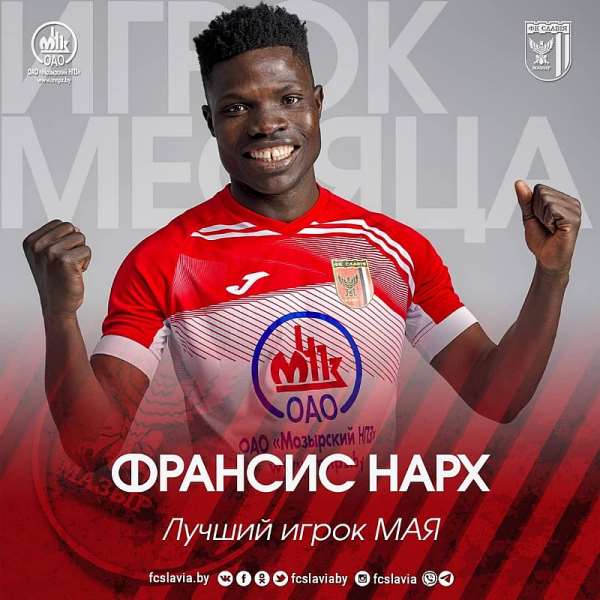 Ghanaian attacker Francis Narh has been named as the Slavia Mozyr 'Player of the Month' of May for his outstanding displays in the Belarusian Premier League.

The pacey winger displayed impressive form last season and has continued from where he left off this season.

In the month of May, the former Tema Youth talisman was in his usual elements and contributed immensely to help his team pick up some important points.

Having featured in as many as 5 matches in the Belarus top-flight, Francis Narh contributed with 2 good goals [In games against FK Vitebsk and Belshina Bobruisk] on top of his eye-catching attacking play that has attracted a lot of attention.

At the end of the month, he has been voted as the team’s best player for May, beating goalkeeper Mikhail Baranovskiy, as well as striker Maksym Slyusar.

Narh, 26, amassed 420 points from the votes against 190 and 260 for the goalkeeper and striker respectively.

This season, the Ghanaian has made 11 appearances for Slavia Mozyr and has scored 4 goals in the process. Not only has his contribution to the team being second to none, but his multiple 'Man of the Match' awards also speaks volumes for his form this season.