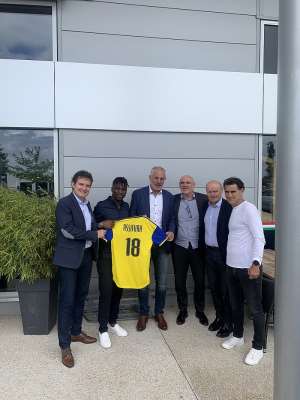 Modernghana Sports can report that former Ghana U-20 star Ebenezer Assifuah has completed has transfer to newly-promoted French Ligue 2 side Pau FC.

The once highly-rated striker has been playing in the French Ligue 2 in the last 3 years with Le Havre, a club he joined in 2017 from Swiss top-flight side FC Sion.

Although the early days of his stay with Le Havre were fruitful, several injury setbacks in the past year forced him to miss most games. During the time he was fit too, his place was taken and he had to succumb to bench-warming duties.

Following what will sum up as a frustrating season, he has finally found a way out after signing for Pau FC.

Ebenezer Assifuah, 26, is the first signing by the newly-promoted side as they look to bolster their squad for their maiden season in the French Ligue 2.

The Ghanaian striker has been handed the number 18 jersey and he will play under coach Didier Tholot, a man he worked with during his time with FC Sion in Switzerland.

Women Are Placed First In NDC — Naana Jane
1 hour ago