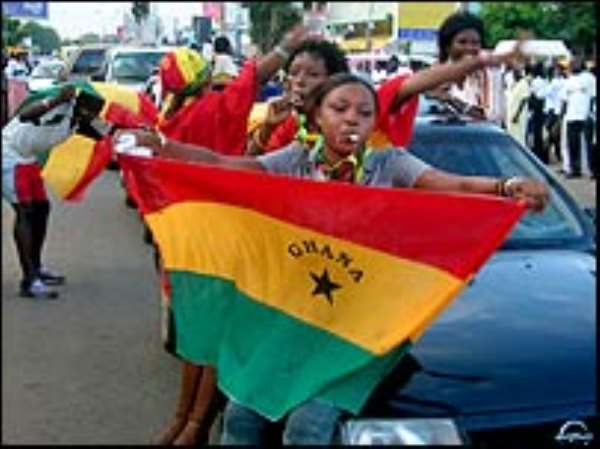 Accra, June 22, GNA - There was an explosion of joy and patriotism reminiscent of the days when Ghana won its independence from the British as the streets in and around Osu in Accra were taken over by revilers who let their emotions run wide after the senior national team, Black Stars beat the United States of America 2-1 to make it to the last 16 of the World Cup.

The fans draped in the national colours spilled into the streets in droves immediately after the match waving the red, yellow, green flag to rapturous cheers from bystanders.

Car drivers were not left out of the fun as they tooted their horns to celebrate the enviable feat achieved by the gallant Stars in Germany. In demonstration of how Ghanaian women have taken football to heart, breaking away from tradition of football being the preserve of men, they joined in the celebration with their flags, in cars and on any moving object to savour the famous victory.

Ghana's victory over the USA earns the Stars, who are making their first appearance in the World Cup a berth into the second round, as the first and only of the five African representatives in this year's event.

Though some of the celebrations, especially those by some cars boarded on a knife-edge, as any mistake could result in fatality, for once, nobody seemed to care as everyone threw caution to the wind. Whiles some sat on top of cars singing patriotic songs, those on foot never missed a second of the celebrations, as they formed groups and took over the streets in celebration.

There was no mention or reference to the Stars' painful opening day defeat to Italy as Ghanaian for once, believed that the Black Stars had what it takes to go far in the competition.

At the Danquah Circle, traffic grounded to a halt, as fans that watched the match on a giant television screen close by, poured into the street after the match to celebrate.

An elated fan, Joyce Annan who GNA Sports spoke to, said she just felt like hugging all the Black Stars players, to personally thank them for what they had done for the nation.

Another lady, Rose Adjei in an Areeba funny hat said all Ghanaians should celebrate because 91this is indeed a special day.'

"What I went through on during our opening day's defeat to Italy made me loose a little confidence in the team, but after the Czech win and our win over the USA today, I fell we can beat any team in the tournament."

"Bring them on" was the words of Kwaku Ntim who told the GNA that the Stars team had what it takes to go very far in the competition.

"The Western media have made some of their players large than life, but on the pitch of play, we have the materials to beat every team if we put our heart and mind in it."

He said if Shilla Illiasu and Habib Mohammed could play with the superstars of Italy and Czech Republic and did not allow them to walk over them, then the Stars were 'into something good.'

The Stars who played a great game took the lead in the first half when Haminu Dramani who stood in for suspended Sule Muntari robbed the USA skipper Claudio Reyna of the ball to coolly place it beyond the out streatched hand of Casey Keller in post of the USA for the opener.

The Americans lifted their game and drew level when Damascus Beasley capitalised on a poor pass from Derek Boateng to centre for Dempsey to blast home the equaliser for USA.

The Ghanaians remained unperturbed and fought back and had their second goal just before the break, courtesy a penalty converted by Skpper Steven Appiah after striker Razak Pimpong had been upended in the box by his American marker.

Though the American lifted their game in the second half, they could not find a way past the tight Ghanaian defence until German Referee Markus Merk blew the final whistle for the end of the match, after five minutes of added time.